Last weekend was the annual Bandera Trail Race.  The race has options for 100k/50k/25k; there is even a 1m for kids.  This was the 7th time I ran this race and the 3rd time Preston ran it.   The race has gotten very large, this year almost 1000 people ran one of the events.  I ran the 100k and Preston ran the 25k.

Rather than write about it, I put together a 5 minute video of the day.

It’s been a while since I did an update so I thought I’d try to wrap it into one big post.  The subject of this update is a question that Preston asked me last week…  I pondered it for a while and I thought it might be a good idea to make an inventory of what exactly I do and what I have done since returning from Arizona in October.  While I have had time to catch up on a lot of TV shows via Netflix, I have felt very busy.  So I went through my picture file and came up with this journal.

For one, I have been disgusted with how high our cable bill was so I went on a mission to wean us from reliance on cable.  We ended up removing cable and DVRs from everywhere but the media room, and adding a Simple.TV system and Rokus for each TV.  It’s a cool system – Simple.TV allows you to record from the airways and broadcast to a browser or a Roku.  The system has a full DVR guide and allows you to add an external hard drive of any size.  So we just plugged in the single remaining cable feed, and we can now record up to 2,000 hours of programing, and run as many simultaneous streams as we want.  The unit with the lifetime subscription was $99 on Woot.  We also added Rokus (we now have 4 of them).  The devices give you a great interface for cool apps.  We have Netflix, Simple.TV, Amazon, Pandora, HBOgo, and Plex (which allows streaming of my media server), and Time Warner now has an app so we can watch cable via the Roku.  At the end of the day, the equipment I bought pays for itself in 6 months via the savings from the Time Warner bill.

Now for other activities:  According to Strava, I have logged 294.7 miles since Oct 20th, which was the first day I went back to the trail after the 106 mile Mogollon Monster race.  I’m sure there are another 50-100 miles in that period where I forgot my watch or forgot to turn on the GPS tracking.  The other good part about this is that our two dogs (Izzy and Darby) are in the best shape of their lives also… I try to take them to the trail everyday.  I walk a minimum of 3 miles so they must do 4-5 since they run all over the place.  Here’s a picture of them enjoying the creek. 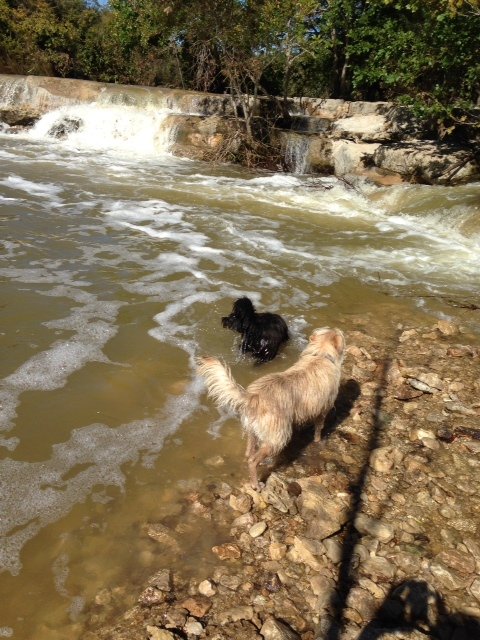 And as I said, I did catch up on a lot of shows – finishing “Breaking Bad,” “House of Cards,” “Homeland,” “Orange is the New Black,” “Parks & Recreation,” and almost all episodes of “The League.”

I sealed all of the cracks and painted all of the patio/pool decks.  While it may seem minor, I had no idea how much work it would be to smear concrete paint around, since it has the consistency of snot.  Even worse was that it needed 2 and even 3 coats in some places.

We were tired of the old, worn, wood railings on the front porches, so I tore them down and built and installed new ones.  We got the design idea from one of our neighbors, and it looks so good we are now going to replace the entire old metal railing that runs up the front steps.  I posted a picture below.  Note that this is now just the beginning of the project—we are also working on additional upgrades such as a new front door, new windows, and a new entryway. 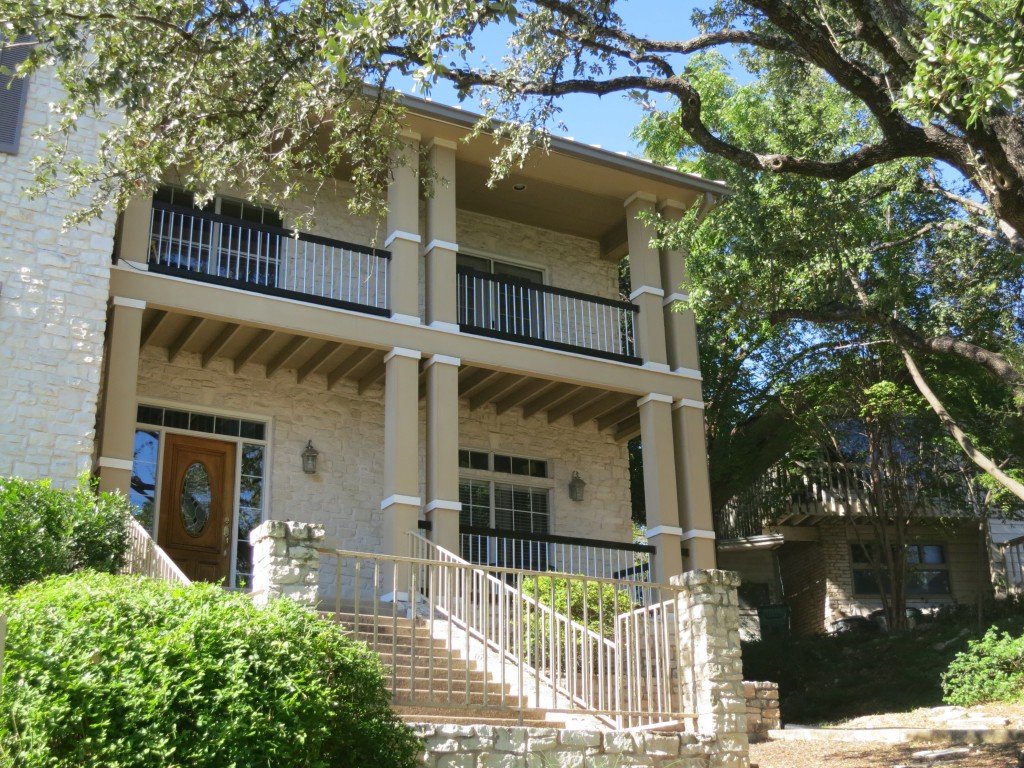 Next, our scout troop did not have enough instructors for rock climbing camp-outs, so I took the instructor-certification course, which entailed going to classes twice a week and spending several weekends in October and November camping at different climbing spots.  The final weekend was out at Enchanted Rock (I borrowed the picture below from the park service site) on Turkey Peak.  We practiced setting anchors and letting the Boy Scouts do climbs and rappels.  When we were packing up the gear that Saturday, I noticed that there was an event being set up.  It turned out to be a trail run that was taking place on Sunday morning.   The distance options were 10k and 25k, and both finished on top of Enchanted Rock.  The timing worked out where I could finish the 10k and still make it to Turkey Peak to finish my certification. 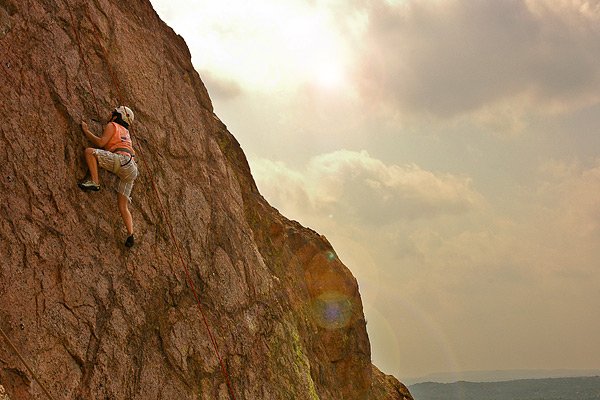 In early November Tracy and I went to San Francisco so Tracy could get her leg checked.  We stayed in the Mission District at an OK Air BnB place; cool neighborhood with great restaurants, but it was a little dirty and noisy.  We did a lot of dining, hiking (picture from the coastal trail below), and visiting with friends.  I also got to have drinks with Tag and catch up on what was going on with my old team at Dell. 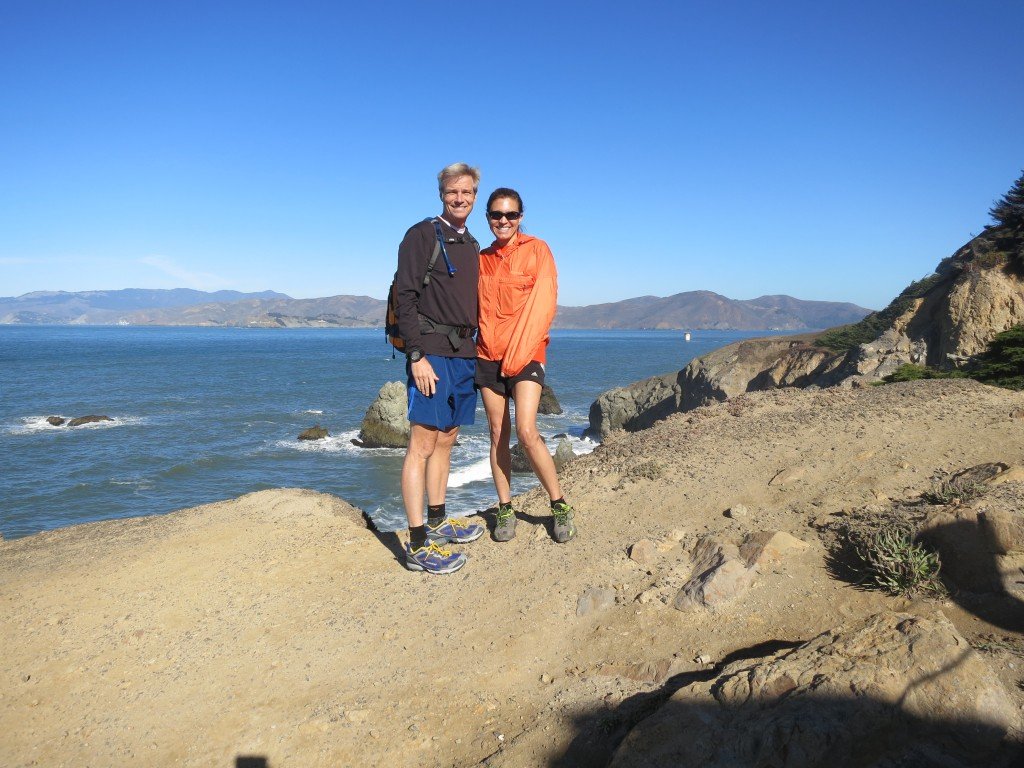 For Thanksgiving we flew to Milwaukee to my sister Deb and her partner Anne’s house.  Tracy had never been there and it had been 10 years since I was there.  It was great to spend time with them and see the incredible kitchen Deb had put in.  On the Wednesday before Thanksgiving we drove with Deb & Anne and their dog Koda to my mom’s apartment in Grand Rapids, Michigan.  Preston flew into Grand Rapids on Thanksgiving day since he didn’t want to miss school.  There is a picture below of Tracy checking for garlic in the bloody Mary mix, Preston acting like a goofball, mom cooking, and Deb taking pictures of everything. 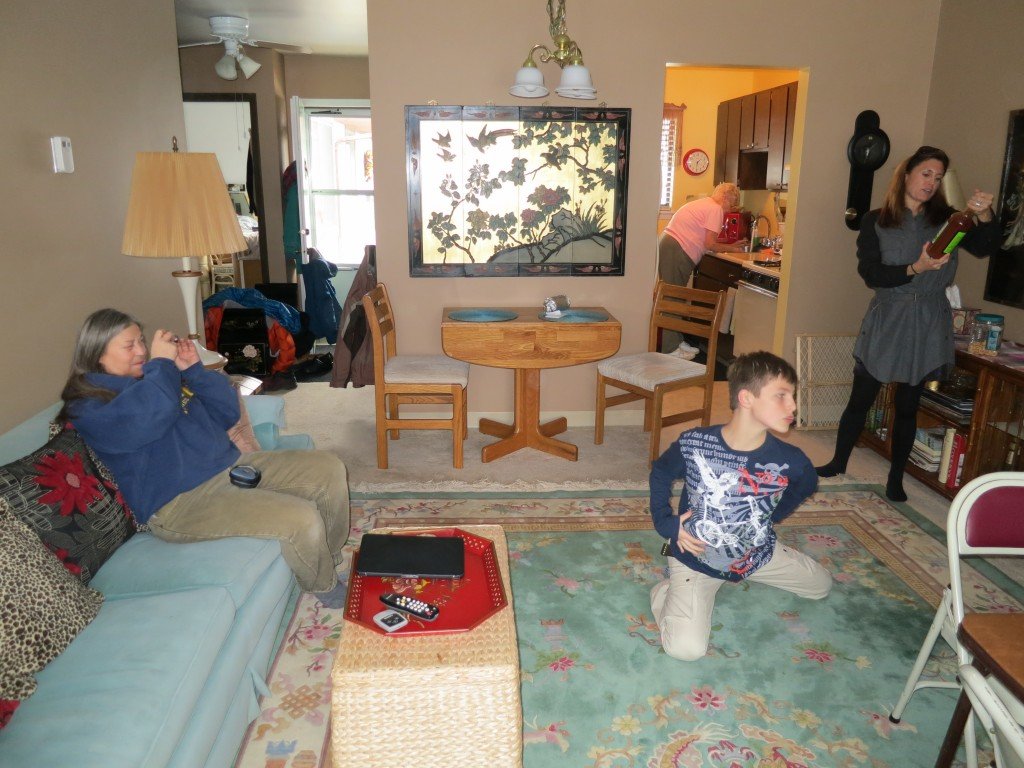 While in Michigan, we were able to get in a couple of runs in the snow. 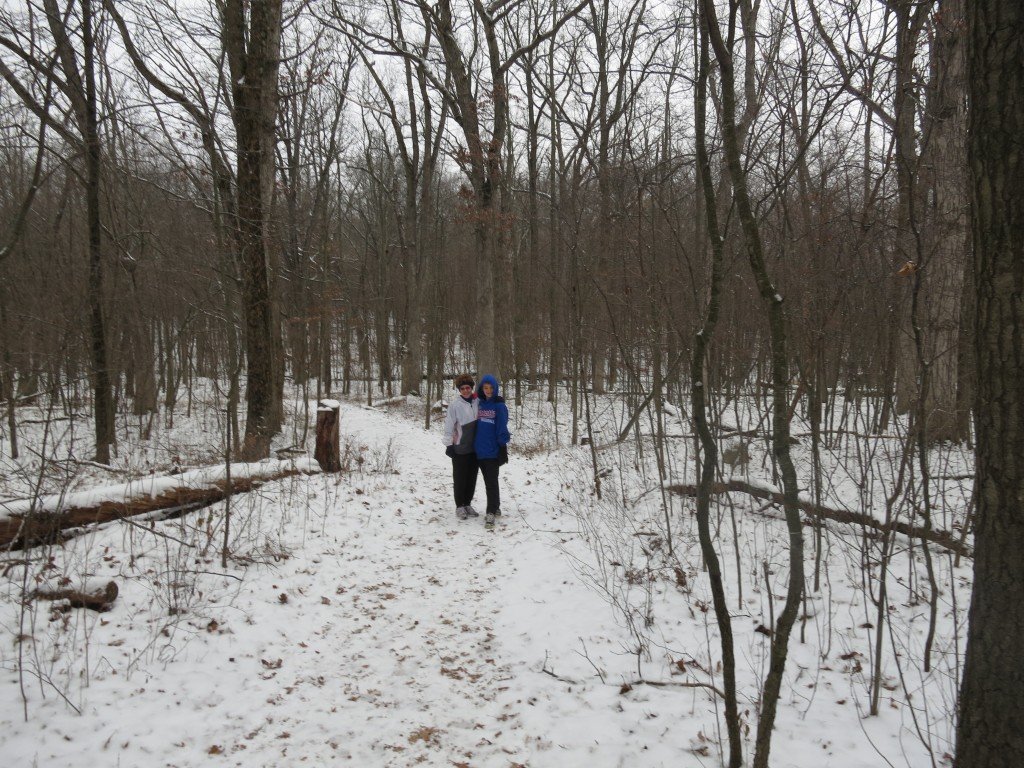 The first planned race I had after the 106-miler wasn’t until December.  I didn’t want to make the same mistake I did two years ago by racing too soon again after a long ultra.  This one, called “El Sendero,” was in Burnet, Texas at Reveille Ranch.  I did the 40k and Preston did the 20k.  Preston and I have run races out there many times, but the course this time was a little different and the trail covered areas of the Ranch with which we weren’t really familiar.  It was a slightly chilly day, which made for great running, and we both did really well.  Finishing line pictures are below. 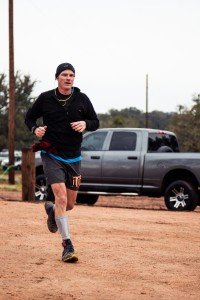 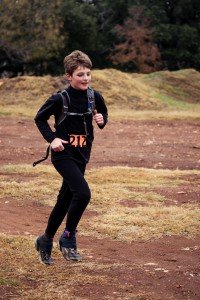 Tracy and I then squeezed in a short diving trip to Cozumel in December.  We had 4 beautiful dives over the four days we were there, and we ended up after two days of rain with two gorgeous days of sun and perfect weather.  On the not-so-great side, we decided to try a new place this time, instead of our usual Iberostar (which we thought had become too run down and mildewy).  So we opted for a place just up the beach called the “Occidental Grand.”  It was far from grand, it was a dump.  We will go back to Iberostar next time.  The picture below is from the lobby bar (which we did like).  I wrote a very unfavorable review on TripAdvisor if you want the details: http://www.tripadvisor.com/ShowUserReviews-g150809-d259238-r188237993-Occidental_Grand_Cozumel-Cozumel_Yucatan_Peninsula.html#CHECK_RATES_CONT 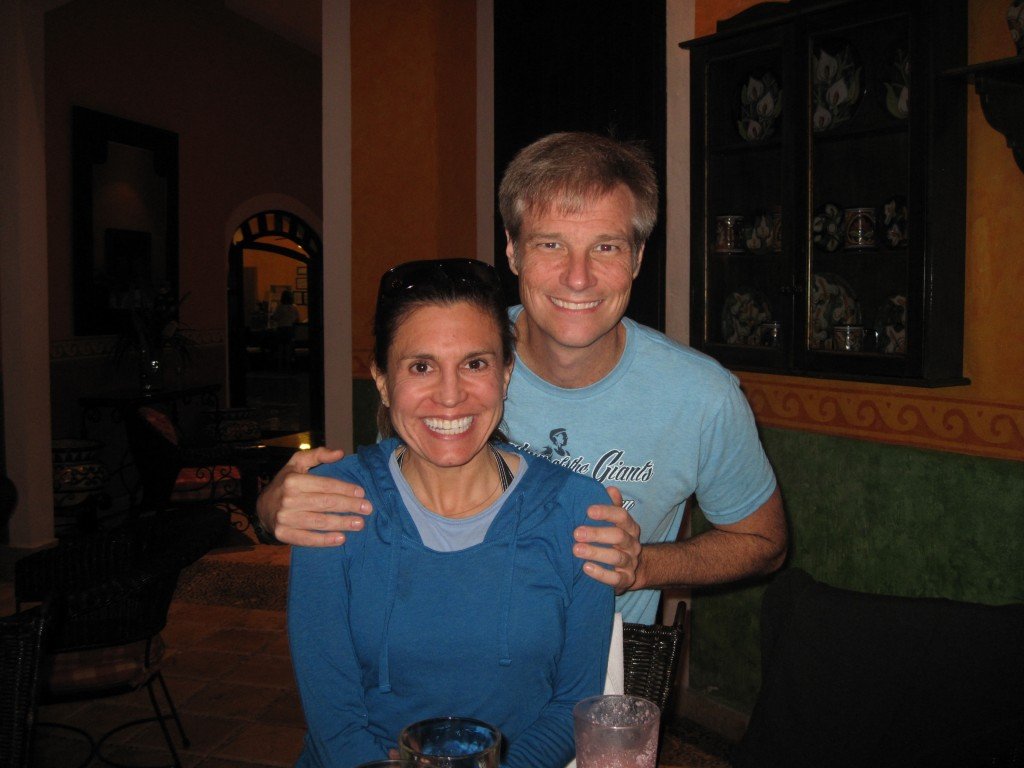 For Christmas, we went to Philly.  It was relaxing and fun being around Tracy’s family.  The picture below is Tracy, her sister Jen, and her triplet brothers at Jen’s house on Christmas morning. 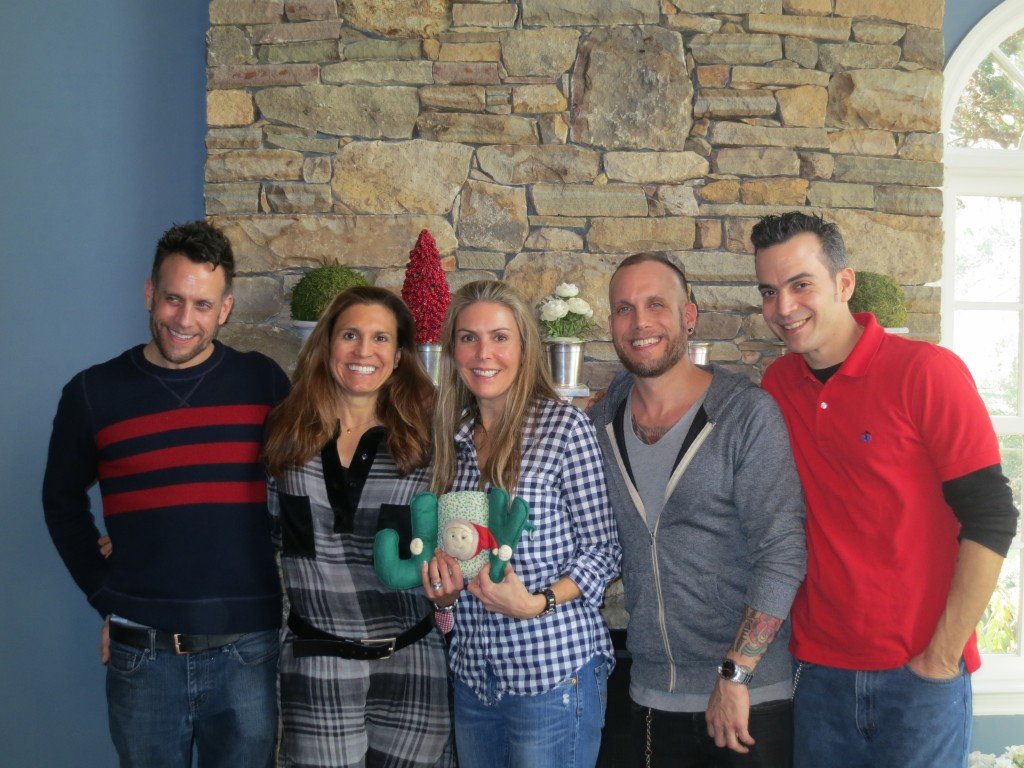 So back to the initial question, “What do you do all day?”  The answer is, “Whatever I want,” and I’ve wanted to do a lot.  My next update will be about the Bandera 100k race, and then I will return to work on February 3rd.