Yesterday I taught a couple of classes at Northern Arizona University.   The sales were entry level sales classes.  I focused on ethics, effective communication, and selling  frameworks.  The class went well and I think that many of those students will attend the job fair on Friday.

Being on West coast time, my days start early (usually 5am ish) but it gives me some open time late  morning.  Yesterday, I used that time to climb to  Sunset trail in West Flagstaff.  The picture below is after climbing 2,000 feet to the Sunset ridge. 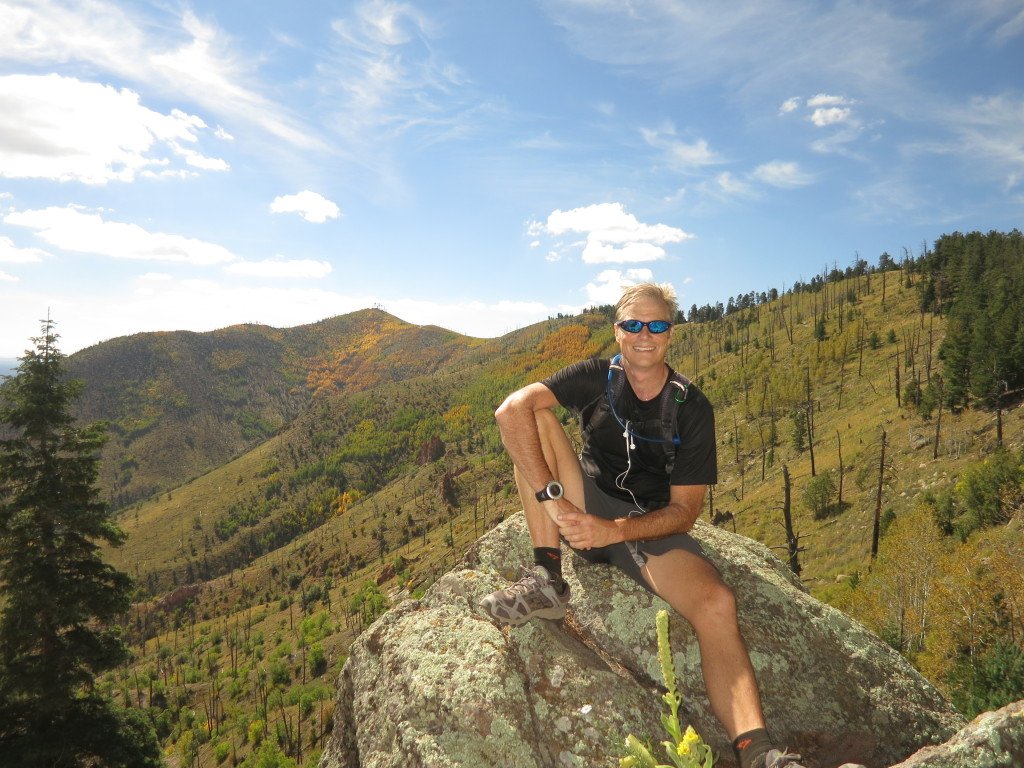 Well the race is over and as the subject suggests, I didn’t make it.  Lots of justifications went through my head for dropping, but the most honest one was that I wasn’t having fun.

The morning was beautiful, the pic below shows some of the Texas runners who came to the event.  Several had been here during the rain-out last year. 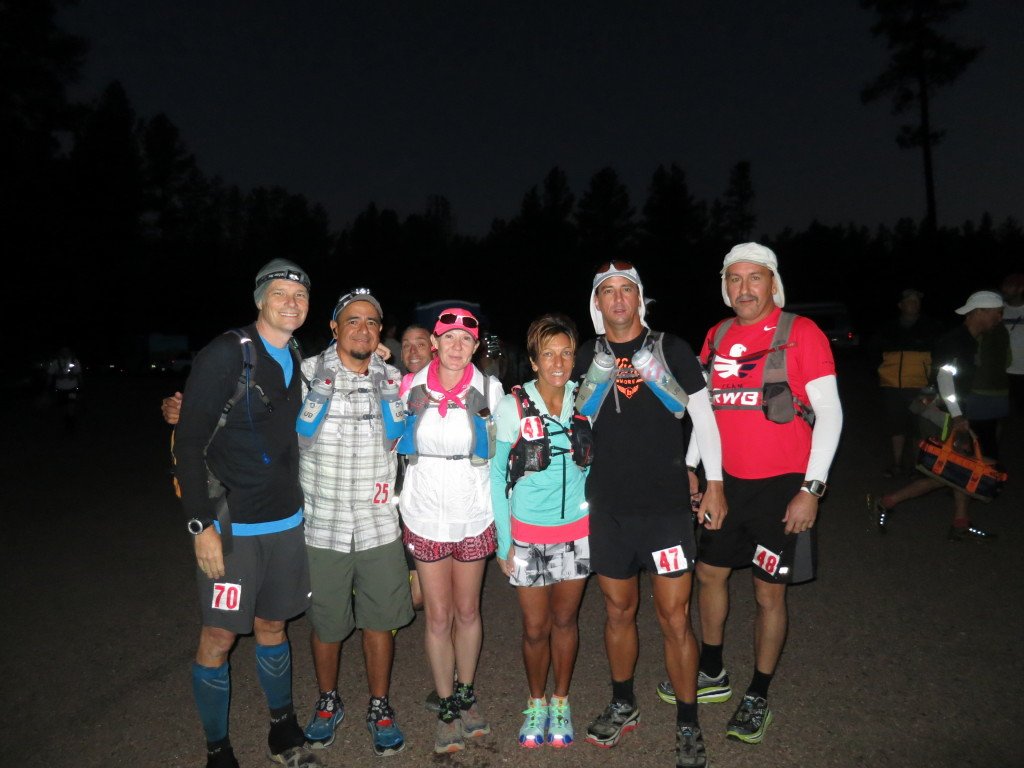 The course had changed and while the new trail was nice, it added about a mile to the first aid station as it switch backed up the open hills.  I was behind where I wanted to be about 20 minutes after climbing out of pine canyon (view below) 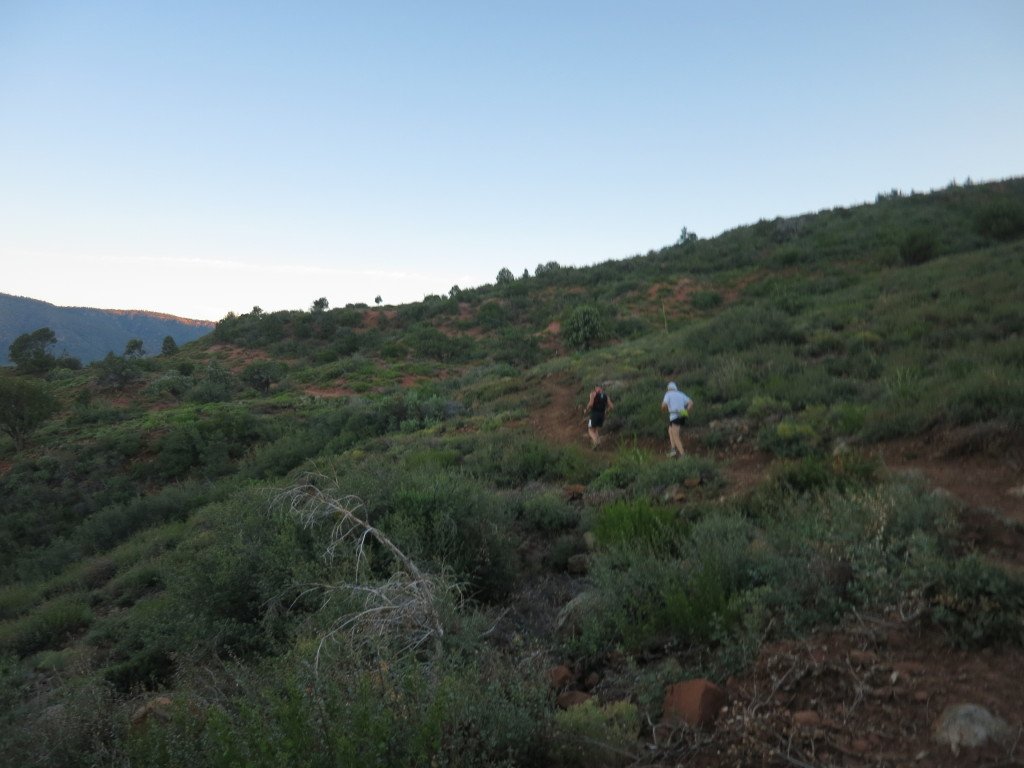 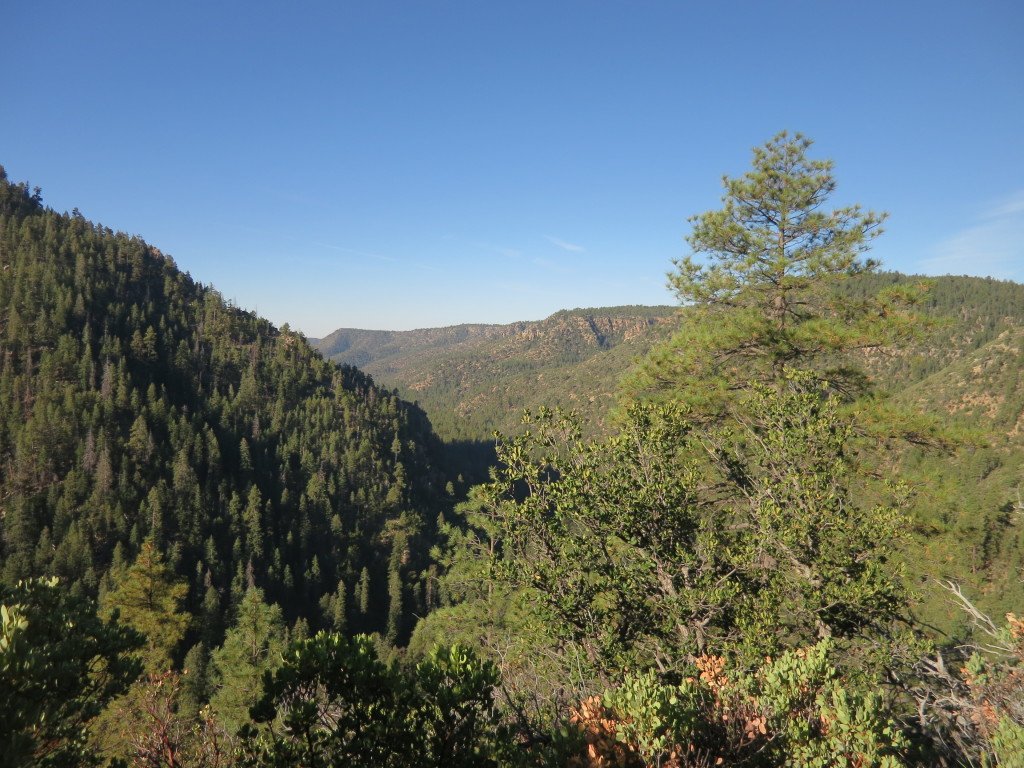 Once I left the aid station, the temperature started to rise and the running was becoming less fun.  It was another 6 miles before I hit the first downhill back to the bottom of the rim.  Compared to last year, the sky was beautiful, but I knew the 10 miles I had to go at the bottom of the hill was going to be hot. 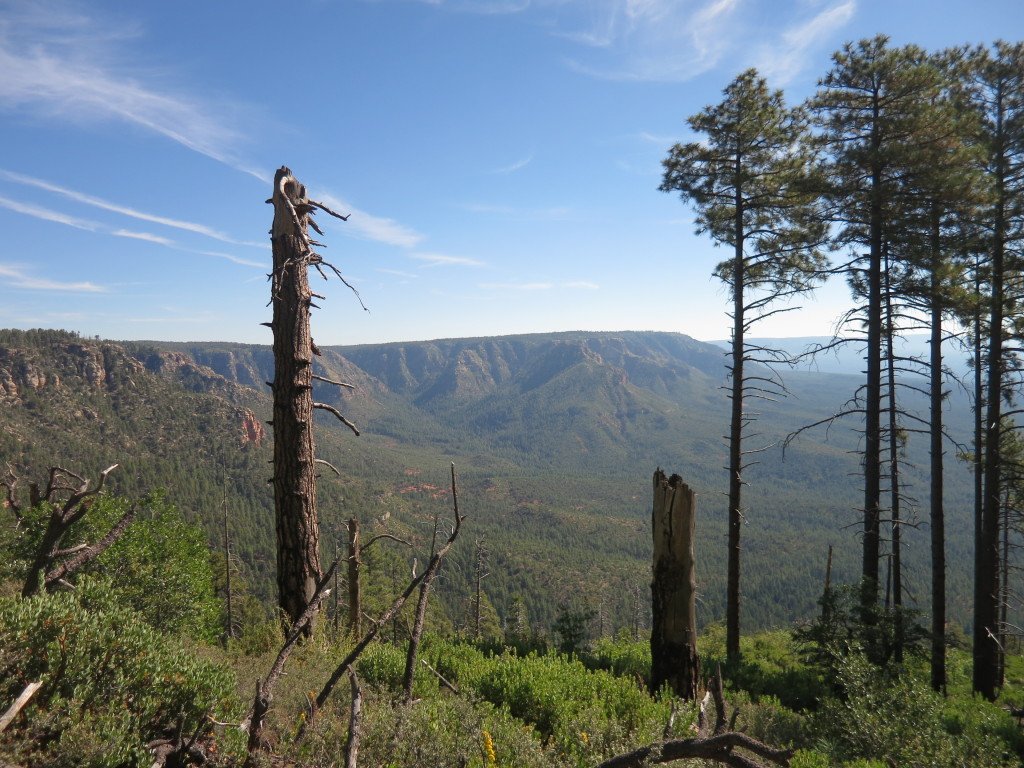 Most of the stretch between the bottom aid station and Washington Park was done at a fast walk.  Even though the trail was a miserable muddy mess last year, the weather was cool so I did this stretch 40 minutes faster than this year.  My watch read 89 degrees as the sun beat off the rocks along side the rim.  I think the actual temperature was low 80’s but it felt like an oven. 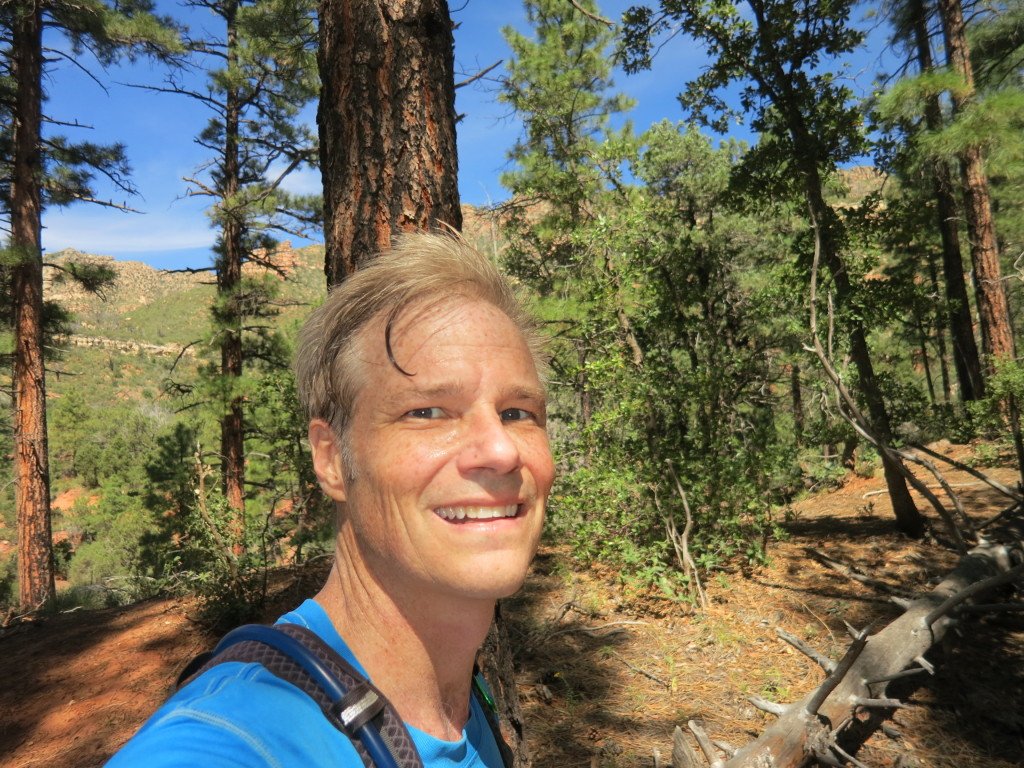 Finally when I got to Washington Park, I sat in a chair and ate some fruit and tried to cool down.  I was about 100 minutes behind where I wanted to be.  When I left 20 minutes later, I started up the hill.  I kept thinking how miserable this was and that I’d have to make that same return trip along the bottom of the rim 24 hours from now and the weather was supposed to be warmer on Sunday.  Once I hit the base to the steepest part of the hill – I dunked my head in the creek, turned around and headed back down the hill.  I threw in the towel at 31 miles.

I got a ride back to the start, had a beer with an English guy who also dropped, and met Tracy for dinner that night.  The following morning, we went to Denny’s only to see Olga and Larry.  Olga had dropped in the middle of the night.  We then went to the last aid station, before the finish and hiked the trail up and over the rim to the other side (pic of Tracy below). 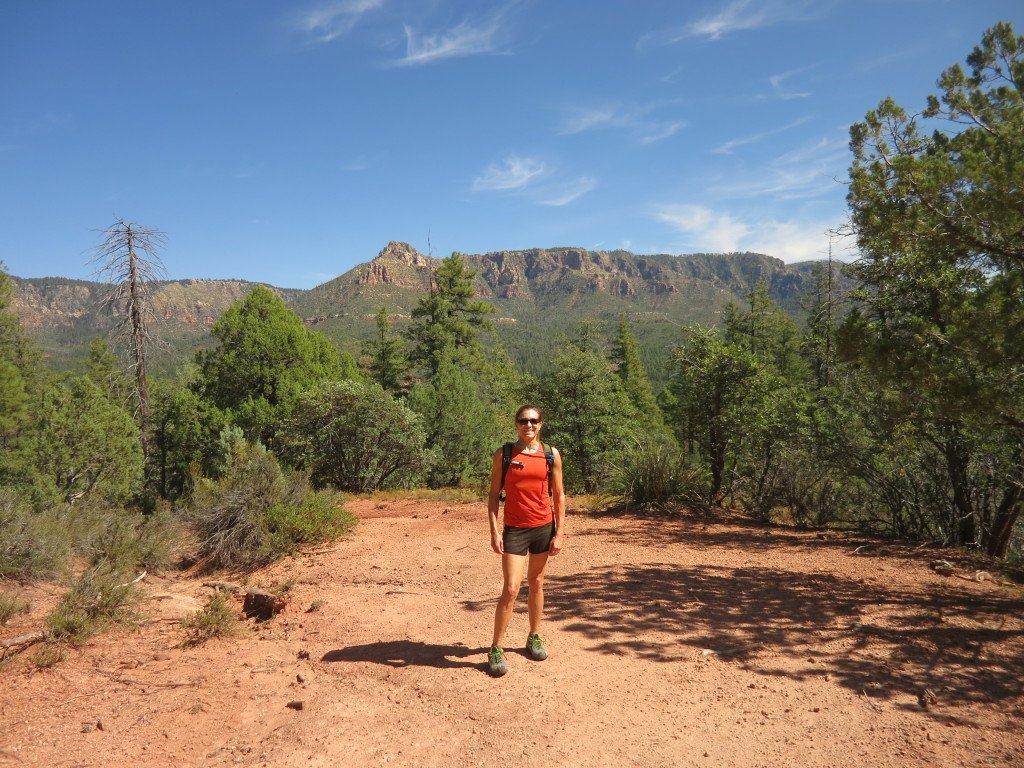 At the finish, we talked to the race director and it looks like only two of the nine from Texas were still on the course.  The others  had dropped through-out the night.  I hate not finishing what I started, but there is always next year.  I decided that I’ll run 50 miles at Cactus Rose in 2 weeks to make up for my shortage in miles.

Going to pick up my packet in an hour or so.  While on calls today, I put together my drop bag for the race.  Since this race goes through the same spot 3 different times, I only need one drop bag or in this case, drop box.

The logistics of a 100 mile race are complex.  Since I don’t have a crew and only one pacer (Tracy is meeting me at mile 87), I need to be very self sufficient.  I carefully plan out what I will need when so I can limit the amount in my pack.   I have 4 stages that I pack for:

1. What I start the race with, mainly a small headlamp, some food, and rain gear (just in case)

2. What I pick up the first time through Washington Park, mile 27 – one pole, more food, and spare water bottle

4. 3rd time through, mile 87 – drop all the warm stuff, flashlight, and pole – load up on food and cold water

The secret to finishing a 100 miler is not how strong you are, it’s how well nourished you are.  No matter how  you feel, you have to keep the calories coming in. 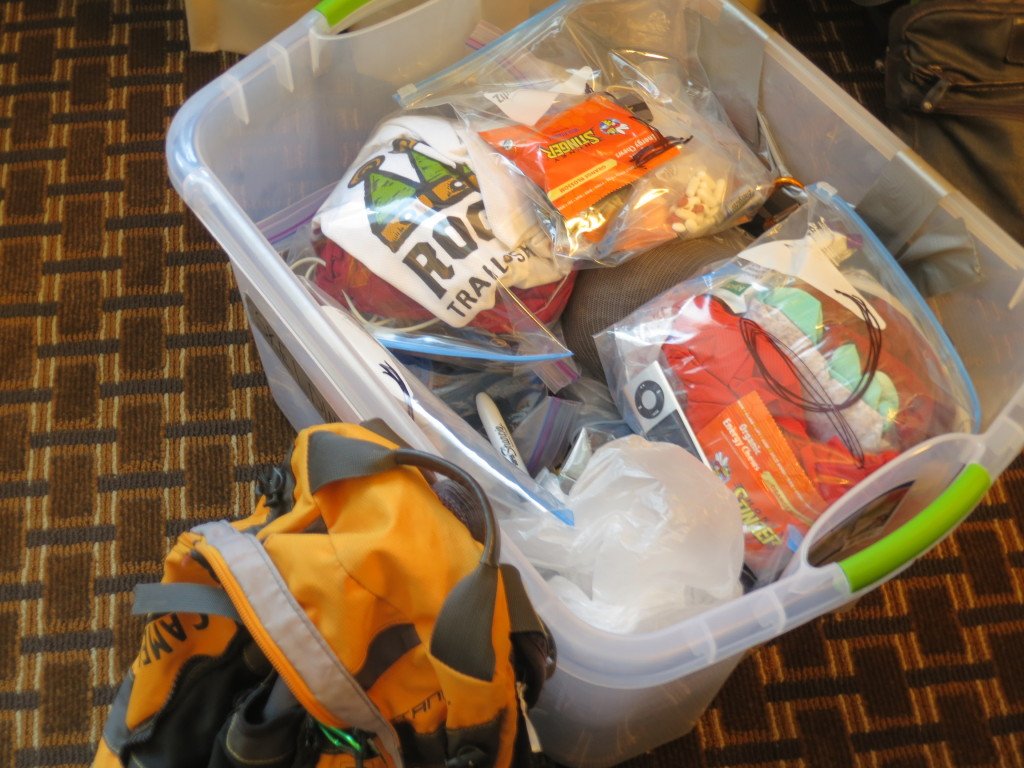 For those new to the Monster – it’s a 100 miler on the Mogollon Rim in Northern Arizona.  This hundred is normally 106 miles but this year it’s 107, as one of the trails was re-routed.  This is my 3rd year running it.  I finished in 35.5 hours in 2013.  In 2014, I only made 44 miles since the race was called due to severe weather.  No chance of that this year since the weather will be sunny and warm (a little too warm).

I’ve followed the same  routine every year.  Last night I flew into Phoenix, spent the night in Flagstaff, climbed Mt Humphreys this morning, and are now in Payson, AZ – 11 miles from the start.   There was beautiful weather for the climb this morning.  I added a few pictures below.   It was my first outing in 2 weeks after twisting my ankle during a training run.  I’ve been very cautious to not exert it since it was very swollen and discolored.   I was cautious thins morning making sure that I didn’t strain it.  I tried out my new poles.  The result was an uneventful climb and decent, but I was 20 minutes slower than the past years.  I’ve determined that poles slow me down so I’m only taking one of them on the race for the later legs when I’ll need the extra stability. 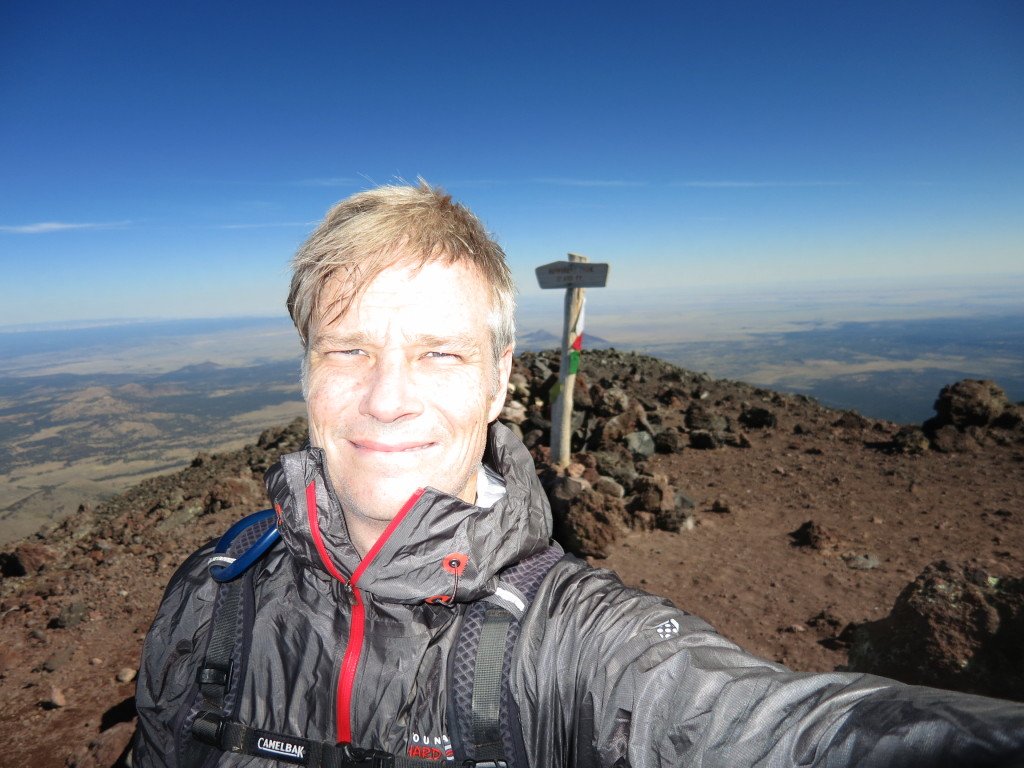 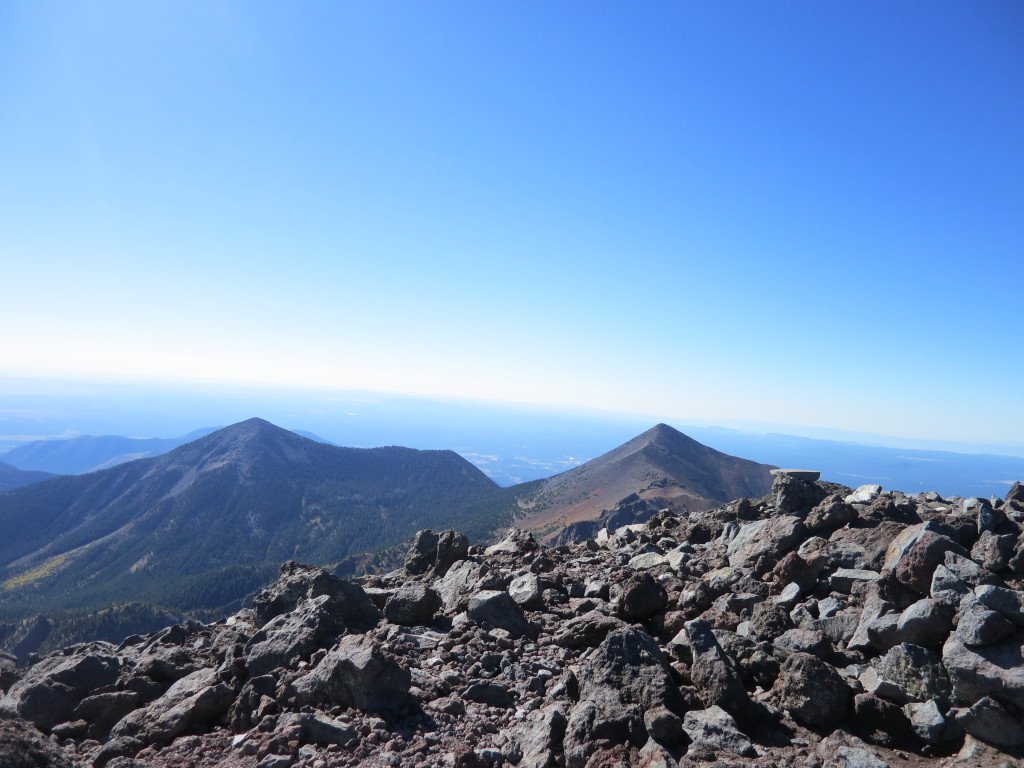 After showering, my ankle showed a lot of pretty colors.  It doesn’t hurt and it’s not swollen so I think it may be the old blood draining.   As a precaution, I iced it for 30 minutes.  I added a picture of that for the viewing pleasure of Mike V since he squealed like a 16 year old girl just sticking a toe in ice after he completed the Leadville 100. 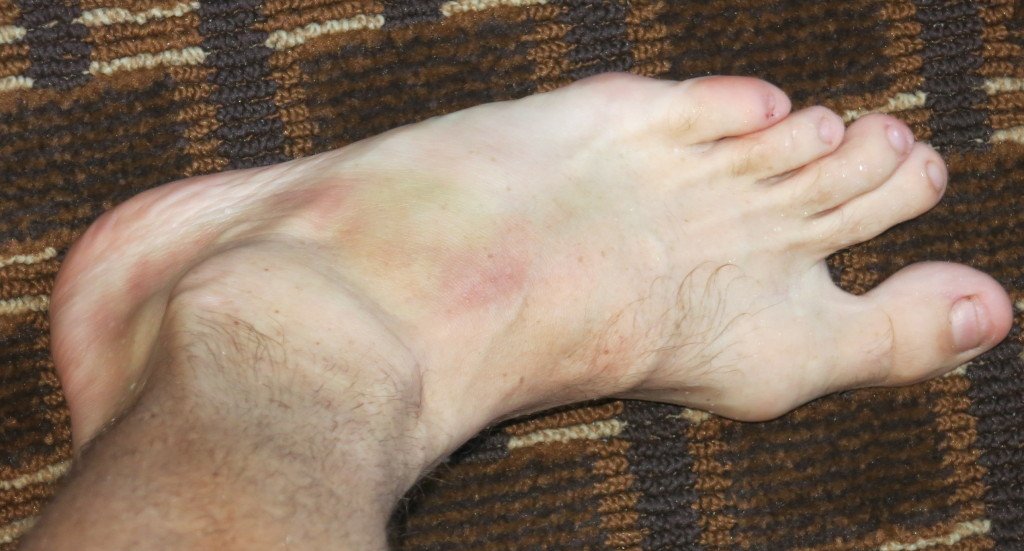 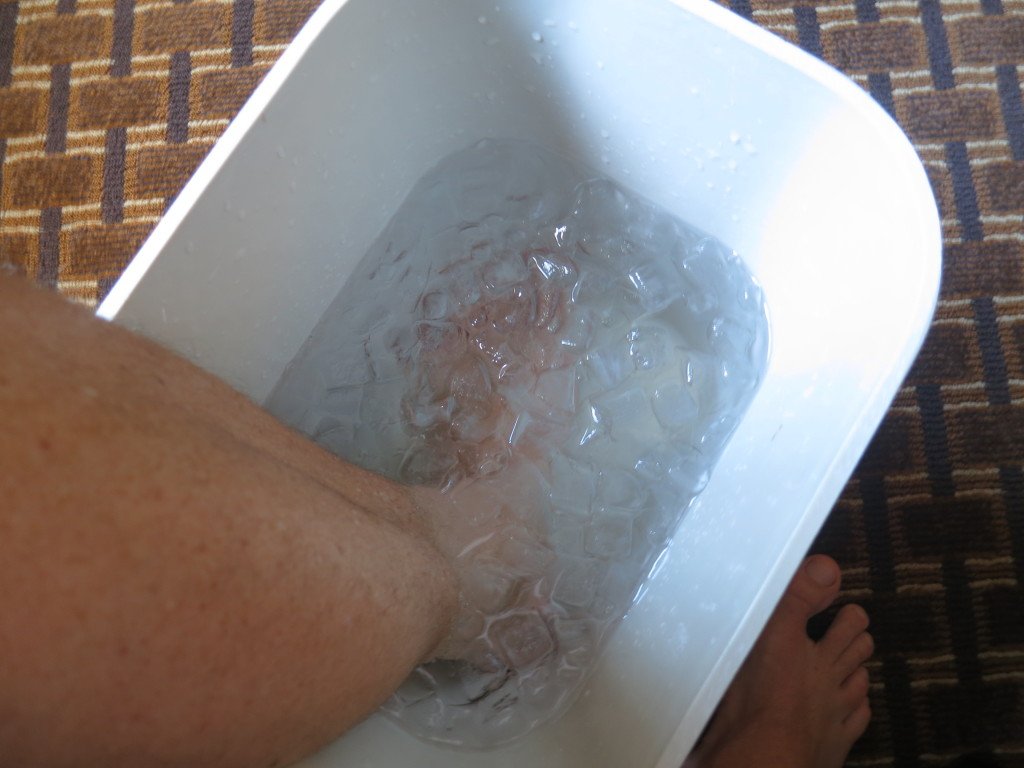