This weekend was the annual Bandera Trail race.   I think this was my 9th year running the race and my 4th time going for the 100k distance.  I’ve completed the 100k twice before, dropping to 50k last year due to the mud.  This is also the same course that I attempted the 50 miler in October – that race I dropped due to the crazy rain.

There would be no excuses this year since the weather was beautiful.  The temperature ranged from 40 – 65 degrees and it was sunny all day.  Tracy came with a few of her rowing friends and signed up for the 25k.  She stayed at a ranch outside the park, while I slept in my car at the start line.

Tracy joined me in the truck prior to the race, so I got a kiss for luck.  The race has about 1000 people in total spread among the 25k, 50k, and 100k distances.    The 3 races start in different directions and my group had about 300 people in it.  The course is two 50k loops that cross 6 aid stations.  The course traverses a variety of cactus covered hills that are very rocky and steep.  I did the first loop in 6:15 and felt great.  I met Tracy and she told me that she ran a 2:56, 25k and won her age group.   After a short change of shirts, I headed out on the 2nd loop with my friend Mike pacing me.   We ended up running/hiking most of the 2nd loop with another guy, Boz.  We completed the 2nd loop just after 10pm putting our time at 14:48 – which is about 20 min slower than my fastest 100k.  Overall, it was a great day.

The pic on the left is one of the many fields of sotol cactus you mus run through.  The leaves are sharp and slice your legs.  The right picture is a typical climb of the many hills you the course goes over 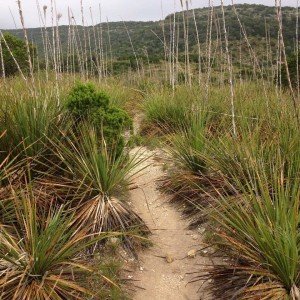 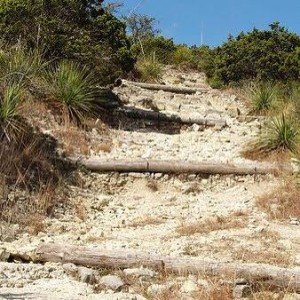