My friend, Chris Walton, and I went to Vegas this weekend.  Our goal was to get up really early on Friday morning and climb the North loop trail of Mt Charleston.   The round trip is 20 miles and you start around 8200ft and climb 4000ft to the summit over 12000ft. 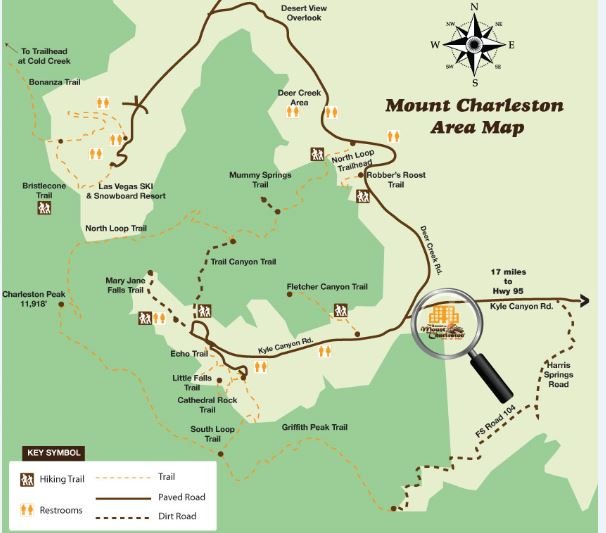 Unfortunately, our plan did not go as we intended.  The trail heads West around Mummy Mountain and up it’s West side to line up for the approach on Charleston.  At the first intersection of the trail we went right rather than left.  On our way back we took a picture of where we went wrong (below).  There is a very visible trail to the right but the North Loop trail actually goes left over the hump.  There is a sign, but unfortunately it’s on the ground mixed in with some dead branches.  When we saw where we went wrong, we felt better that we weren’t complete idiots, but we won’t make that mistake again. 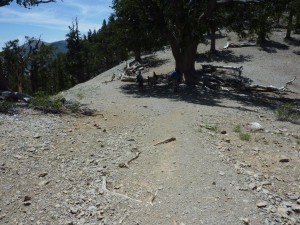 The trail we took started climbing steeply up the mountain.  We gained about 1000ft in a very short period of time.  Once we reached the top, we knew that we were off track but were looking for ways to rejoin the trail without going backwards.  We wandered around on the ridge for a while looking for a spot to get down until we found a group of guys that told us how to get to the Mummy Mountain summit and the route from there to the Charleston summit. 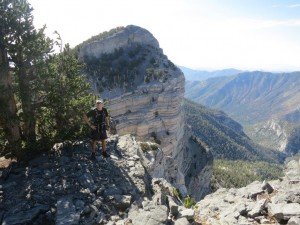 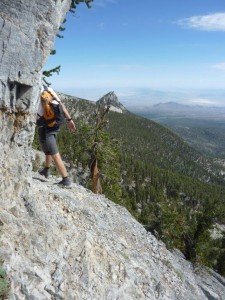 The route they told us was to climb the 2nd avalanche chute where we could scrabble to the peak.  We saw the guys following us once we reached the top of the chute and we let them know that their instructions were incorrect since we weren’t on the summit and there was no easy way down.  We were at a notch in the top of the ridge with sheer 50ft cliffs on both sides and a very, very steep chute off the other side (picture below – notch is circled). 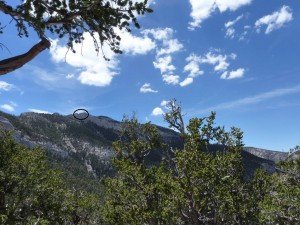 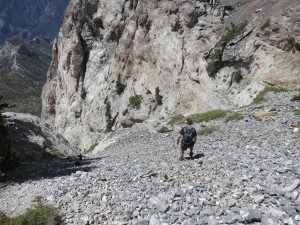 Traversing a chute can be fun, but it’s also really dangerous since you don’t know how steep it will get and you don’t know where the chute will dead end at too steep of cliff to go over.  This would have caused us to climb back up and over the ridge which wouldn’t be a lot of fun.  The chute was steep but it was full of scree so we could “surf” on the way down.  All was going well and we’d dropped about 800ft to 10500ft when we hit a wall about 25ft tall that required some down climbing. 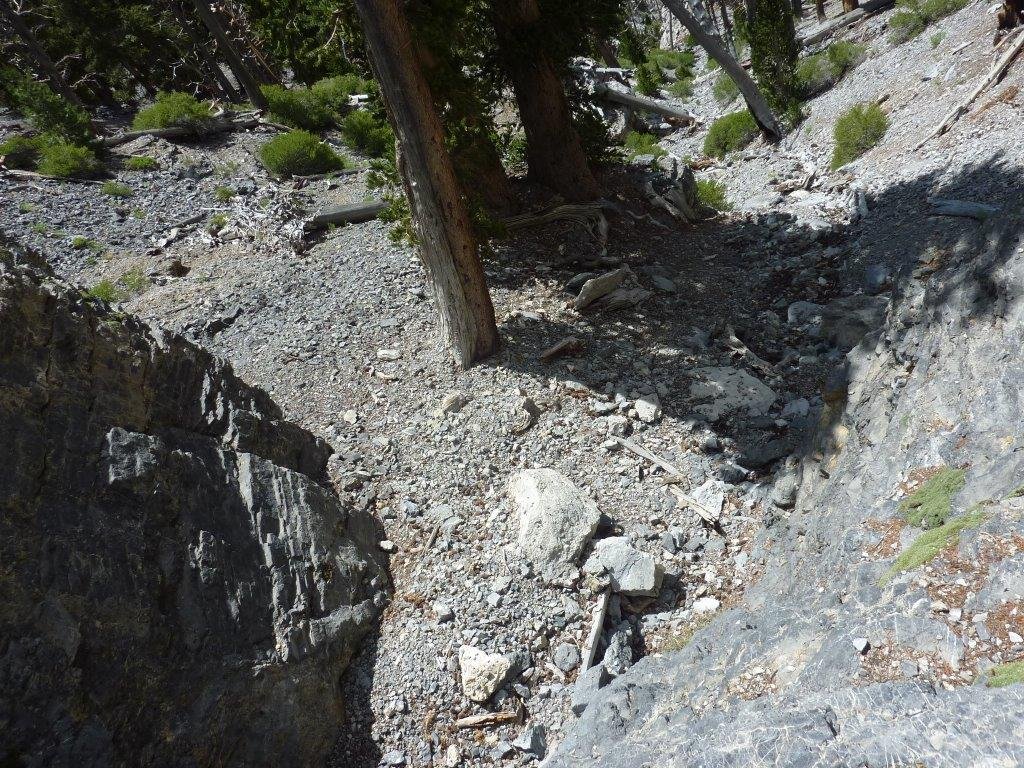 The picture above is what it looked like from the top of the climb.  Walton went first and nimbly shuffled down the face.  When climbing with ropes, I’m completely comfortable doing sketchy thing, but dropping 25ft on a sheer face without any safety gear had me unnerved.  Walton patiently talked me through the maneuver and I made it down unscathed.  After the wall, we continued to drop down the chute with only a few detours to move around ledges, until we finally reached the trail.  We decided that we’d had enough and started heading back down the trail we should have been on in the first place.  In a few minutes, we came to trail junction which is the 4 mile mark back to the trailhead.  Walton is pointing to the chute that we came down below- we dropped over 2000ft in that chute.  We pressed on and finally made it back to the road.  At the road we were met by a herd of wild horses that were using the road as their trail. 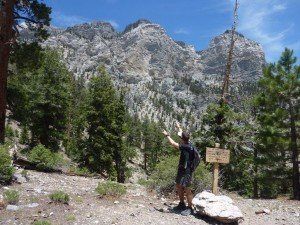 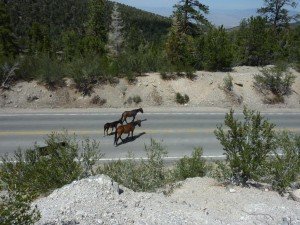 We haven’t downloaded our watches yet to get the actually mapped distances, but we think we climbed about 6000ft over 12 miles.  In total, we were out for 8 and half hours.  It was a good day, but we will be back soon to successfully summit via the North Trail.

Tracy and I are just coming back from a long weekend in Colorado. Leadville is an old mining town that is located over 10k feet in elevation. In the late 19th century, the town was booming with the mines and it was in contention with Denver over who would be the state capitol.

In most years, our friend Eddie leases a house in downtown Leadville. This year, he leased it for the month of July. We arrived very late on Thursday night to Eddie’s rental on 2nd street. 2nd street used to be State street which had 64 saloons and was considered the “red-light” district during the mining rush. Now Eddie has a 3 bedroom rental from the turn of the century.

As always, Eddie was incredibility hospitable – food already bought, towels laid out, etc… basically all the comforts of home. We slept in the following day and had a decent night’s sleep considering we just came from sea level to over 10k feet elevation. After some coffee and treats, we headed up a dirt road to the trail head to Mt. Sherman. The mountain is basically a pile of scree and rock, but towers to 14,035 feet.   The climb is about 2000 feet, but being less than 24 hours acclimatized, it was tough going. Below are a few pictures of us on Mt Sherman. 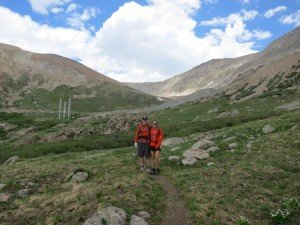 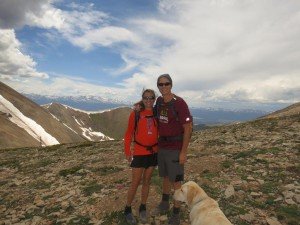 The following morning, I got up with the birds and was at Mt. Elbert’s trailhead by 5:30am. My goal for the day was to summit Mt. Massive and then meet Tracy to summit Mt. Elbert which is about 6 miles away. The round trip to Mt. Massive to Mt. Elbert’s trailhead is about 14 miles with over 4k feet of climb.   My hike to the approach of Mt. Massive started fine. I made the cut-off to the summit trail in one hour, which was right on time. I climbed through the trees to tree line (about 12k feet) in the following hour and started the long approach which is through a col that is covered by summer grass and flowers. I felt great and there was minimal snow so I was able to reach the summit by 9am which was only 15 minutes longer than I thought.

After 10 min or so to eat and relax, I started running down. I came across 3 guys and one of them was wearing a Tejas Trails shirt which is one of the racing companies we run with (I had a Tejas shirt on also). Turns out it was Brandon who is in a whole different speed league than I am. He said they were also heading to Elbert afterwards so I was certain they would pass me on the way. The decent was fairly decent, I ran a lot of it but had calf cramps so I stopped and stretched often. I made it back to the car at 11:15am to find a note from Tracy saying she started up at 10:10am – I’d never catch her when she was fresh and an hour ahead. After a water refills, eating something, and a bio break, I was on the Elbert trail by 11:30am.

The trail was relatively flat for the first mile, which worried me since Elbert is higher than Massive (by less than 10ft) but a couple miles shorter. After mile 1, I hit the steepness I was worried about. It was slow going, one foot in front of the other. Once I broke tree line (12k ft), I could see the false summit (real summit was ½ mile past), which was depressing since I could also see the line of people coming and going and it looked a long ways off. I pressed on, one step after another.   I would stop every five minutes or so for a breather and try and stay hydrated.   After what seemed eternity, I crested the false summit to only see the ½ mile to go also had 500 more feet of elevation gain. My spirits were lifted when my phone rang to talk to Tracy who had been on the summit for 1.5 hours already. I pushed on and 20 minutes later, I collapsed behind some rocks to enjoy the view of the continental divide.

We hung out on top for 20 min or so.  Just as we were leaving Brandon and his buddy reached the summit.  We “mall walked” and ran most of the way down and made it down at 5pm.  All together, I did almost 25 miles and 9000 feet of climbing – time for a drink.   It was an incredible weekend and we can’t thank Eddie enough for inviting us. 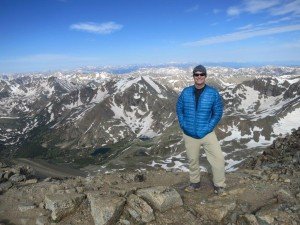 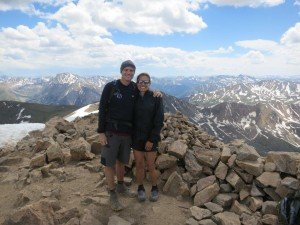 The last Saturday in June, Preston and I ran the Capt’n Karl’s night race a Pedernales Falls State Park. For Texas, the conditions were moderate – starting temperature was just over 90 and with recent rain the course wasn’t a giant dust bowl. Preston finished 50th out of 130 runners in the 10k and I finished in under 3 and a half hours making it my fastest 30k ever. 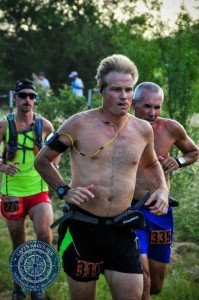 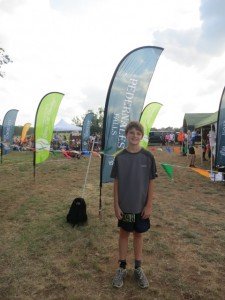