We got to the apartment we rented in Payson mid-afternoon.  The place is a two bedroom downstairs unit in a residential area.  It is really nice and clean.  We couldn’t resist a visit to the Thai restaurant in Payson and it didn’t disappoint.  We both over-ate and made it an early night after a full day of travel and full stomachs.

The next morning, I headed out to Washington Park which is the central spot on the race course.  The park is little more than a parking lot for several trailheads, but 1 mile away is one of the climbs up the rim.  I did several repeats on the climb to get a feel for the course and acclimatize myself further. 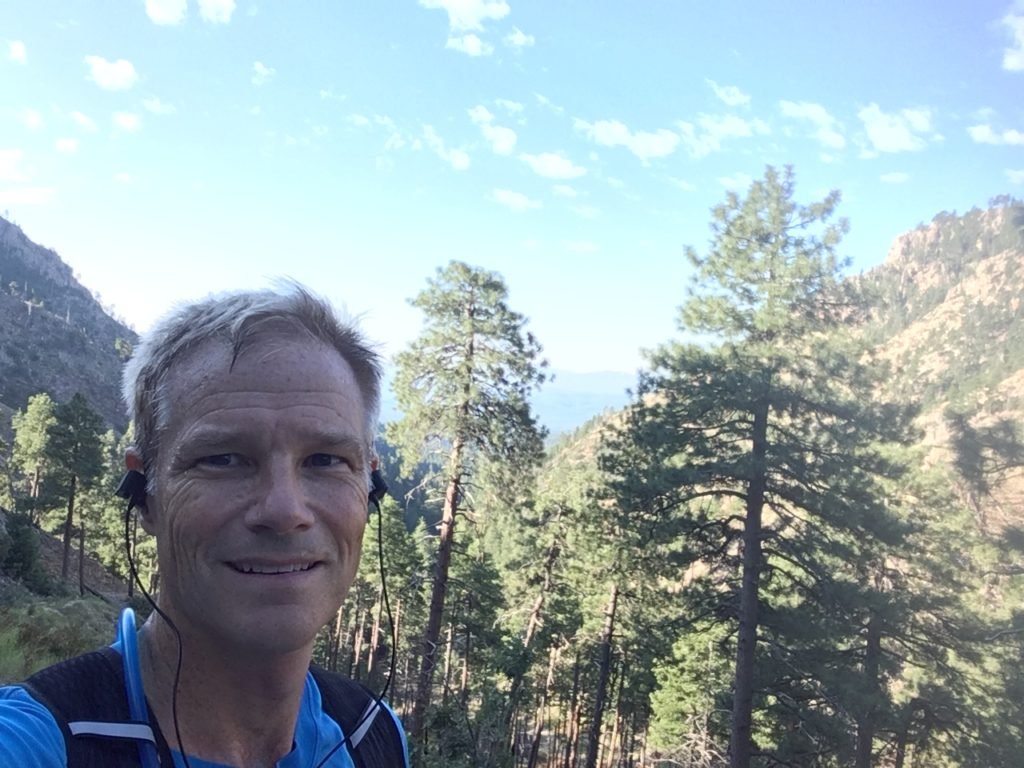 When I got back to the apartment, Tracy had finished her call and we packed up the dogs and headed to the Pine Trailhead, which is the start of the race.  The area is exposed so it was hot and unfortunately, all the creeks were dry so it wasn’t very pleasant.  We decided to head back to the car and drove a14 mile dirt road back to Washington Park.

The trail is tree covered and there is a lot of water.  Since its all uphill, the dogs tired quickly so we let them off the leash.  Izzy didn’t pass up the chance to lay down in every creek we passed. 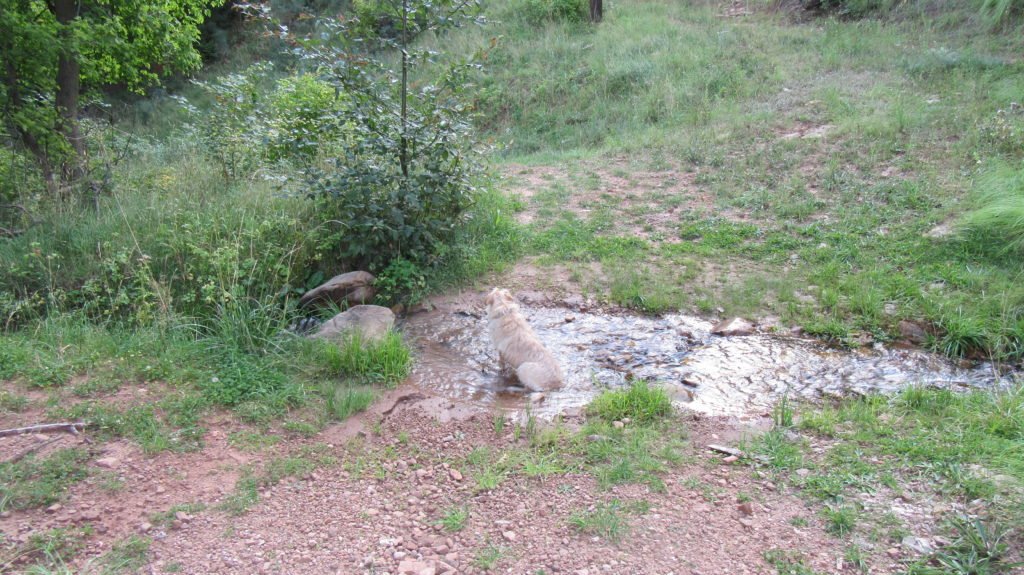 In the morning, I had explored a turn off to 100 years old failed attempt at a railroad tunnel.  Tracy wanted to see it so we climbed up a steep trail into a side canyon. 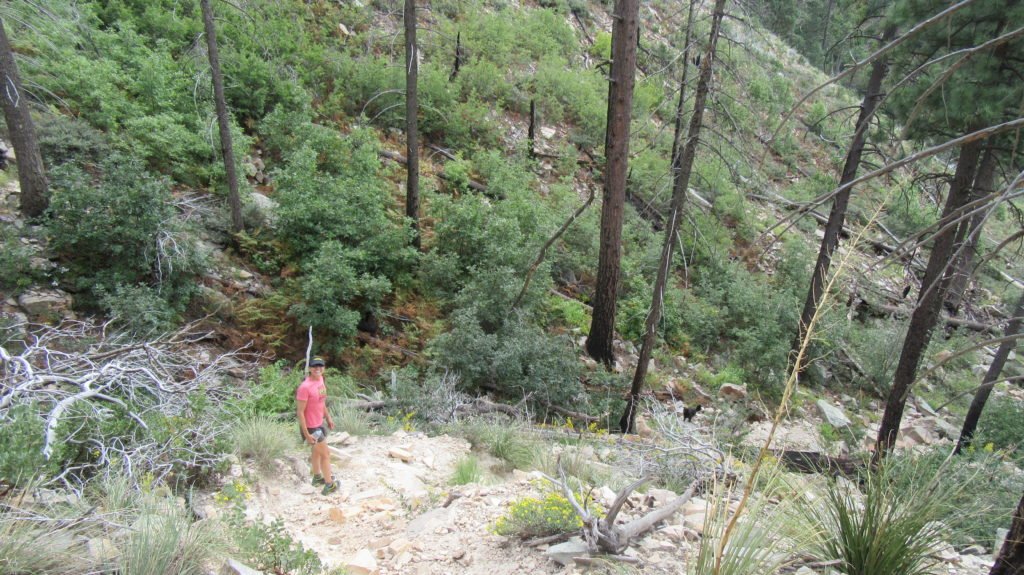 I looked up the history of this tunnel from (http://theproperfunction.com/railroad-tunnel-hike/) and pasted it at the very end of the post.  The dogs liked the tunnel since it was cool and had a little water seep. 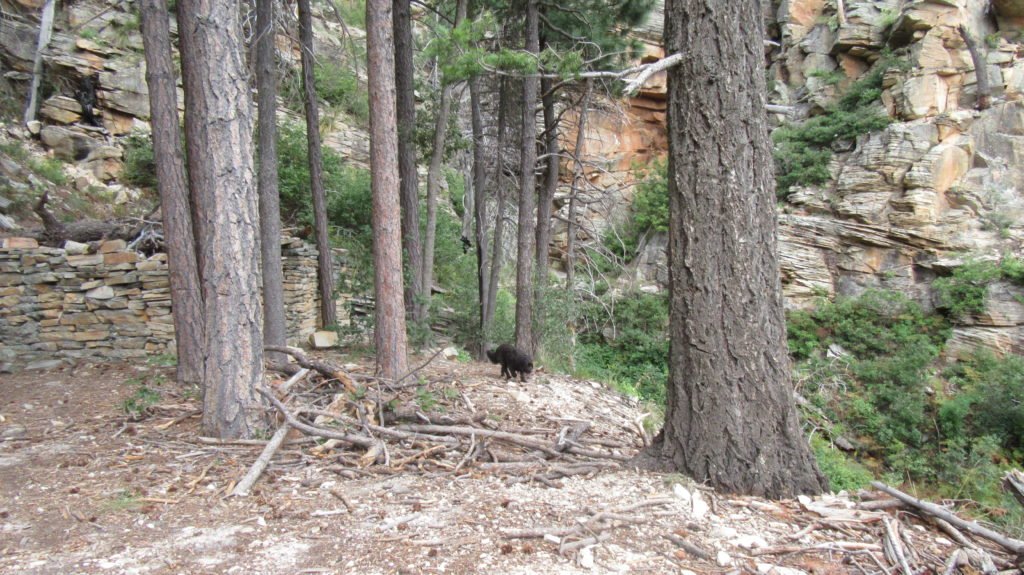 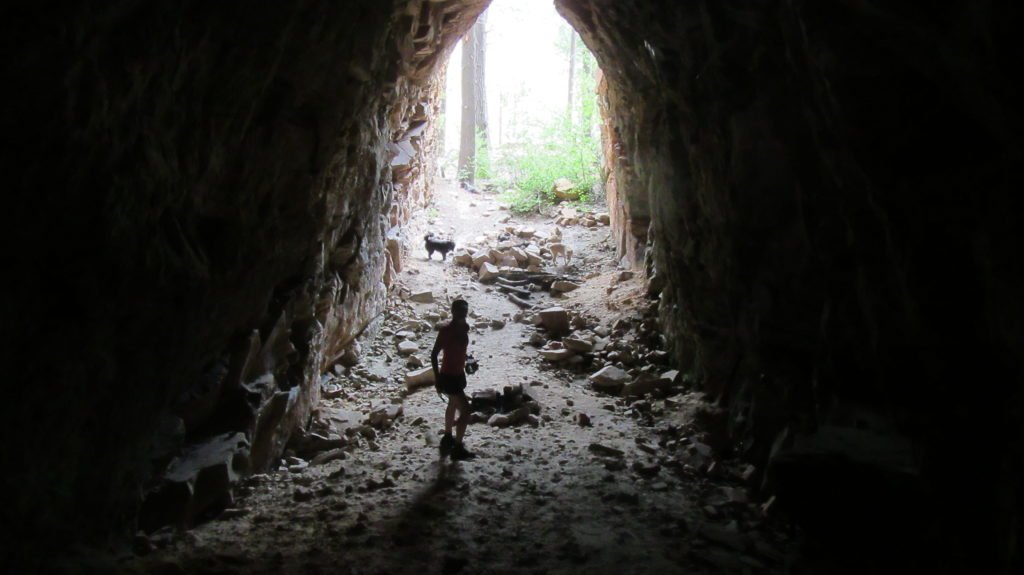 On Wednesday, we drove to Flagstaff and headed to the Humphreys Peak Trailhead.  The plan was for all of us to climb the trail, but Izzy had hurt the pad on her back right foot so Tracy stayed below with the dogs and I went to the summit.  I was a tad slower than 2013, but I felt great.   Just as I met Tracy at the car, a thunderstorm started.  It was short lived, but the clear beautiful day was replaced with occasional storms.

We met the alumni adviser, Melissa, at NAU and she gave us passes to the rec center so we could take showers.  The rec center looked brand new and was incredible.  There were indoor courts, a rock climbing section, and exercise studios.  It made me want to be a college kid again.

We check out a poster exhibit and then got a private tour of the campus telescope.  They had just installed a new thermal imaging camera that was cool to see function.  Afterwards, we went to dinner a a pizza place and coincidentally the owner, Caleb, is running the Monster also.  We were chased indoors by another storm and that same storm slowed our drive home considerably.  We made it home around 9pm and crashed after a very long day.

The next two days are rest days and I’ll get all my gear ready for the race. 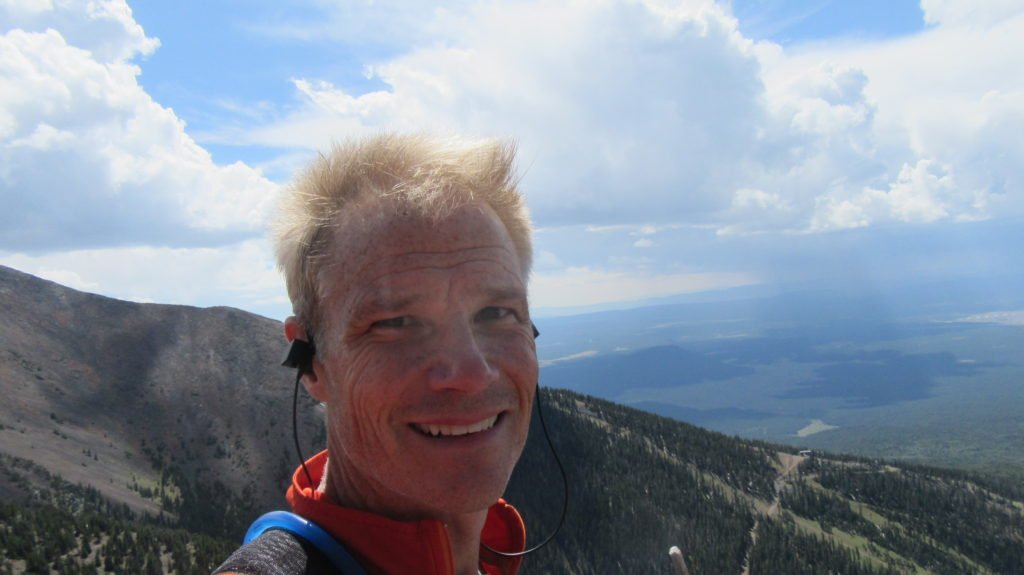 It was Hell on Wheels during the 1880s when railroad tycoons conjured up an idea – create a railroad tunnel through the Mogollon Rim! James W. Eddy developed a value proposition to transport rich silver ore from Globe while connecting with the Atlantic and Pacific rail of Flagstaff. While the concept was lofty, initial seed capital was raised as investors had visions of enormous profit. In 1883, a powder house was erected and 42 men began drilling the 3,100 foot-long tunnel.  Only one problem, this was Rim Country!

The route was surveyed to cross the treacherous and unforgiving Mogollon Rim that is capped with extensive basaltic lava flow. The line would need to include a reasonable grade that would need to be engineered through the uppermost sandstone stratum of the rim, called Coconino Sandstone. The formation of this Sandstone is windblown in origin and is one of the thickest sand-dune-derived sandstones on earth! As a result, the Mogollon Rim proved its worth when the company filed for bankruptcy in 1888, more than 3,000 feet shy of their goal. Today, the 70-foot-long hole is a fascinating impression from an age of the great railroad.