It’s a great time of year in BV. The weather is getting really warm and the snow is receding. Last week, I climbed the Buffalo peaks (13.2k) via a cross country route from the Tumble trail. There were a few snow fields to navigate and a vicious wind, but otherwise it was a straight forward climb.

I’ve also been busy around the house. I made another giant pot of corn chowder and filled the planters.

The dogs have been putting in a lot of miles on the trail and seem to be enjoying it here.

The snow finally melted enough that I could make it to the saddle on Mt. Yale. In a couple weeks, I’ll try for the summit on the East ridge. The last picture is Yale in the distance taken from further down the Colorado Trail.

On Saturday I did the Spirit Vertical Run DUO 14er Challenge – a virtual race put on by Spectrum in Austin. The goal was to climb 12,571 feet, which is the elevation gain from Buena Vista, CO to two Collegiate Peak summits (Mt Harvard and Mt Columbia), combined. It took me over 10 hours to do 11 repeats of a segment of Colorado Trail on Mt. Yale. I ended up climbing just over 12.6k in 30 miles (up and down). I got 2nd place. 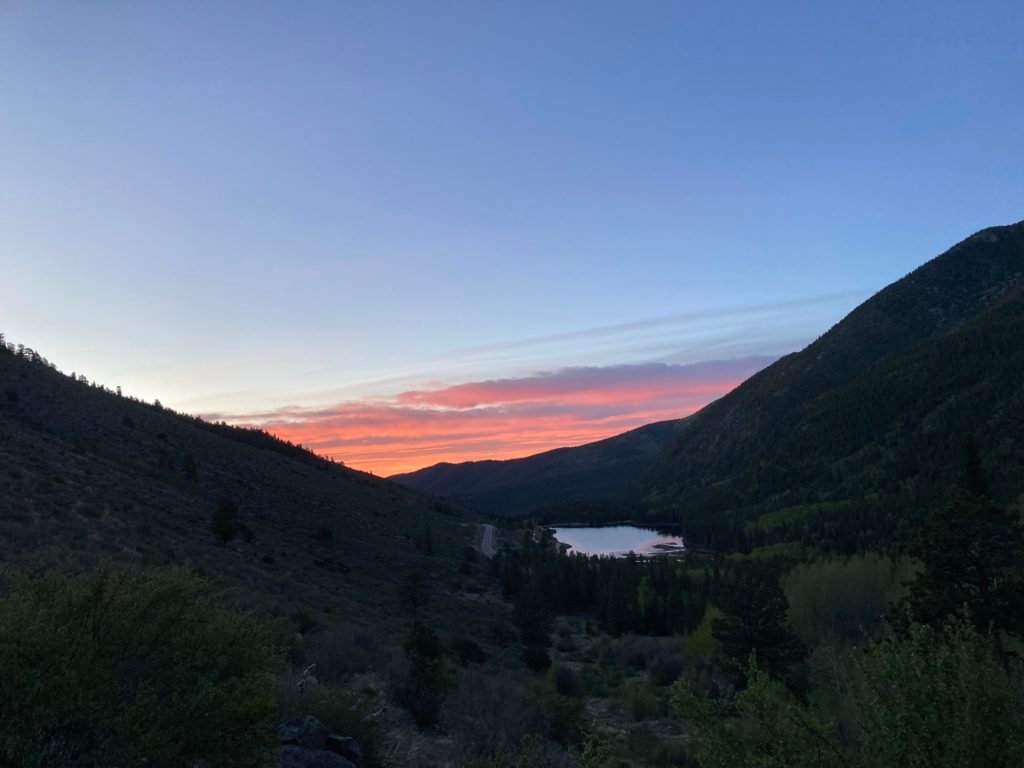 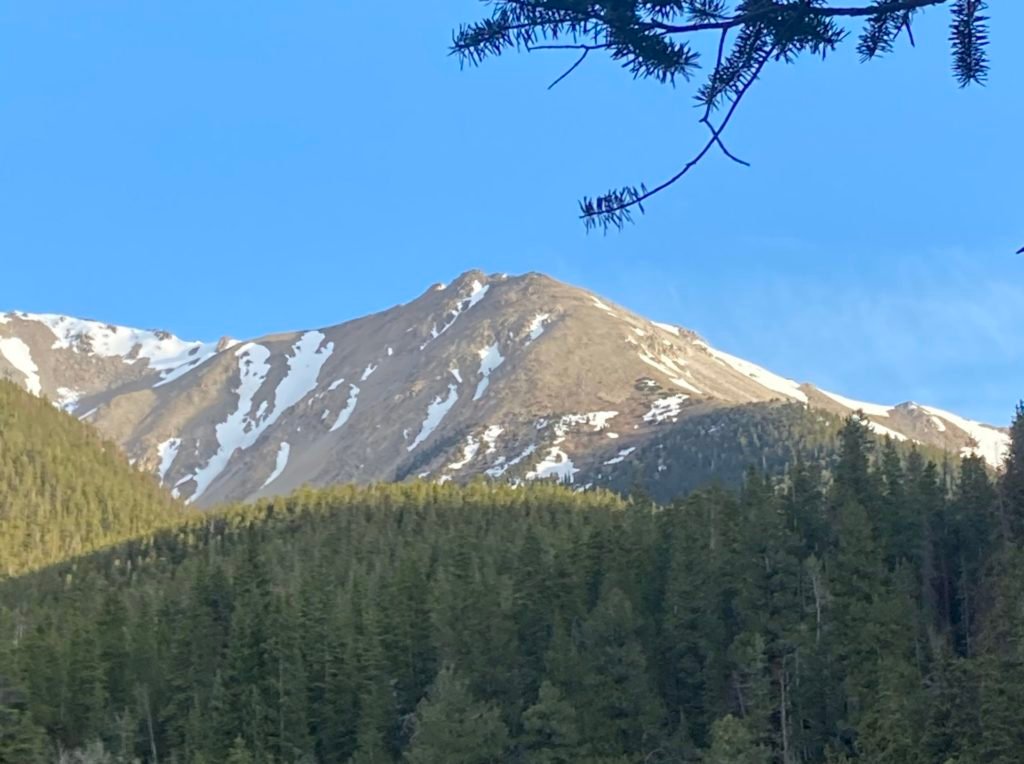 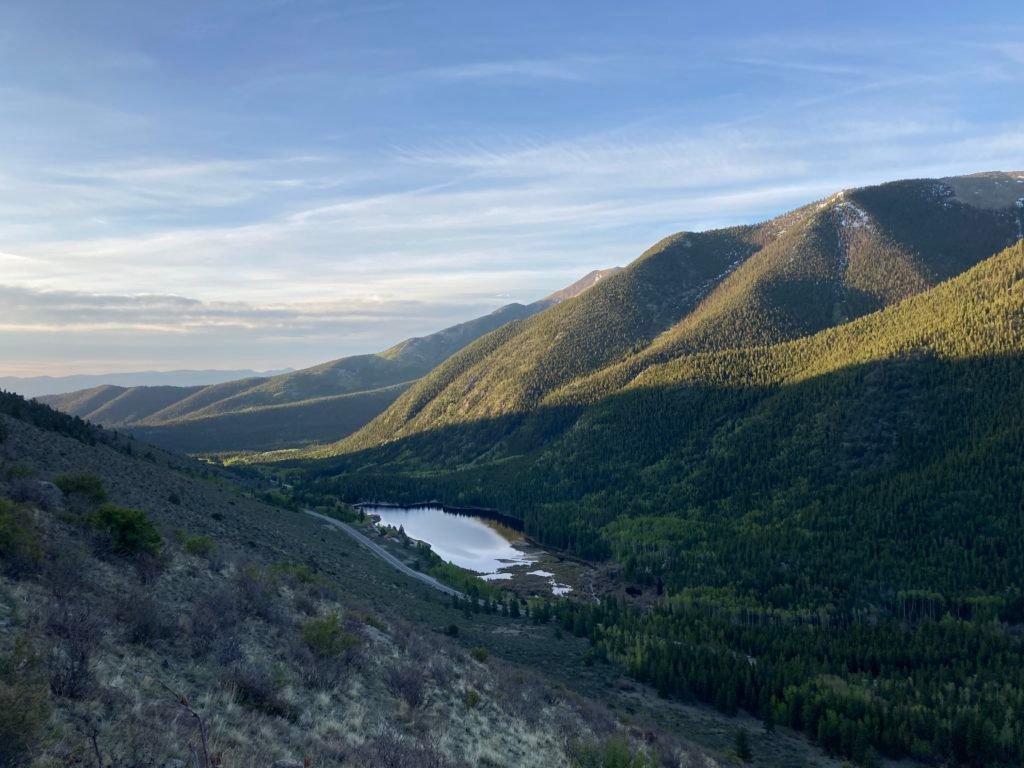 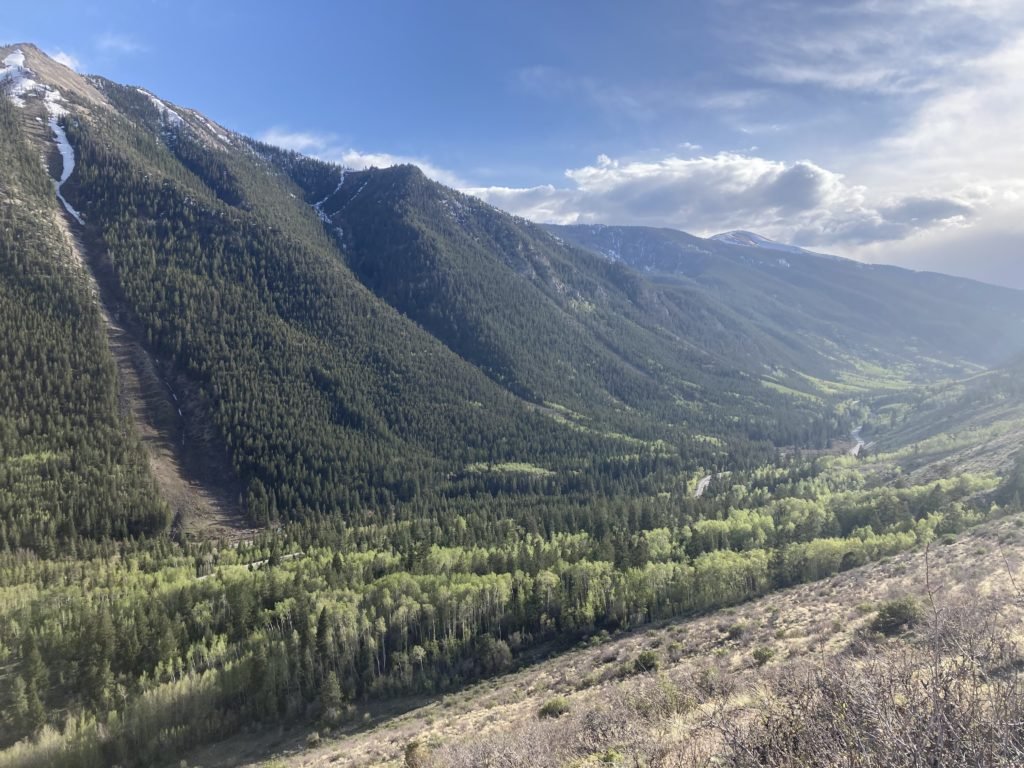 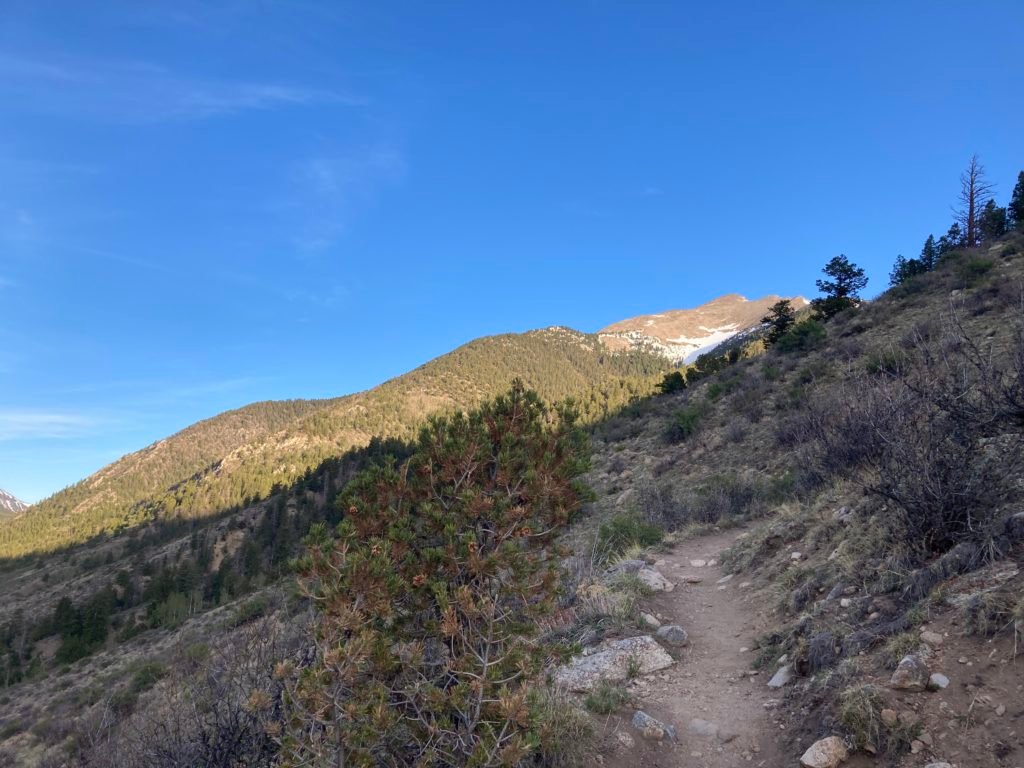 The town is still dead, but the weather is awesome. Last week was supposed to be the Collegiate Peaks Trail Run, but it was cancelled. I decided to do one loop solo, unsupported. The weather was awesome and I only got lost once.

The only thing in town that has been challenging is the grocery store. On days when the weather has been borderline, I’ve cooked. I’d already made 6 gallons of chili and now we have 9 trays of veggie lasagna to fill up our new refrigerator. All the animals around us are also eating. The hummingbirds came the day after the feeder went up and Darby is always hungry.

The dogs have been walking 30+ miles a week and often get to swim in the afternoons. The last picture is from sunrise this morning. The full moon is setting over Mt Princeton. This picture of Princeton and the one above are 10 days apart, showing you how much snow has melted from the peaks.

There are worst places to be stuck in. Pretty much everything is closed in BV except the trails. They are closed to all but locals, so they aren’t busy. We have a great routine: online yoga every morning, a dog walk on the river trail, and an afternoon hike in the mountains or across the river. Happy hour is at 4:30 and we brought plenty of food from Austin. The only annoying thing is that the single grocery store in town is packed, so I limit my visits to opening time one day per week. We have gotten take-out from the neighborhood restaurant and have bought several bottles of the local whiskey to help out.

We’ve made one trip with the dogs up Midland Hill and several trips to the Avalanche Trailhead.

The Surf Hotel is closed, but every couple weeks they are making take and bake lasagna at cost and anything extra you pay goes to the staff. We have an order coming on Friday.

Avalanche is snow free for the first mile and you can almost get 1k feet of climb in. The weather turned cold this week, but I’m betting I’ll be able to get half way up by the end of the month.

The dogs are in heaven. If you click through the pictures below, you can see Darby in her crazy state after getting a bath. 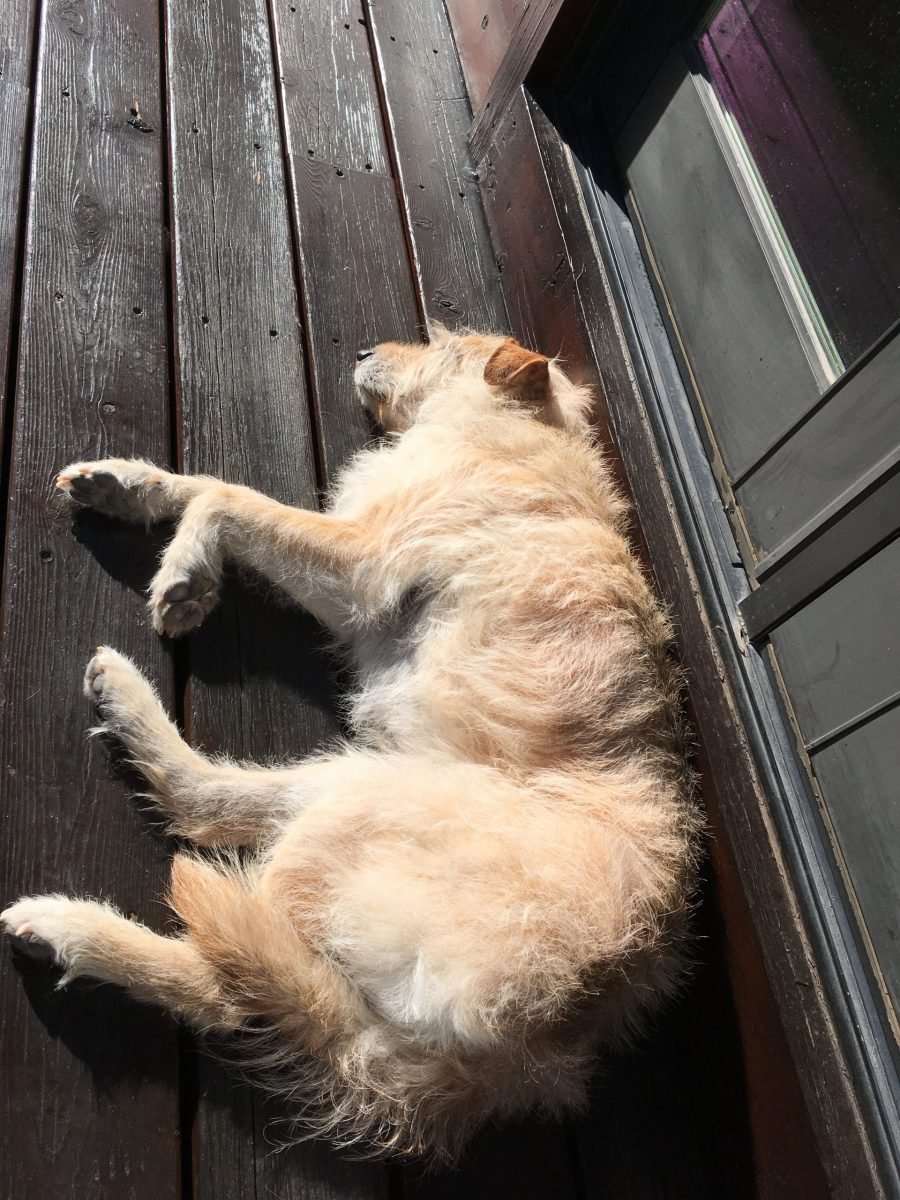 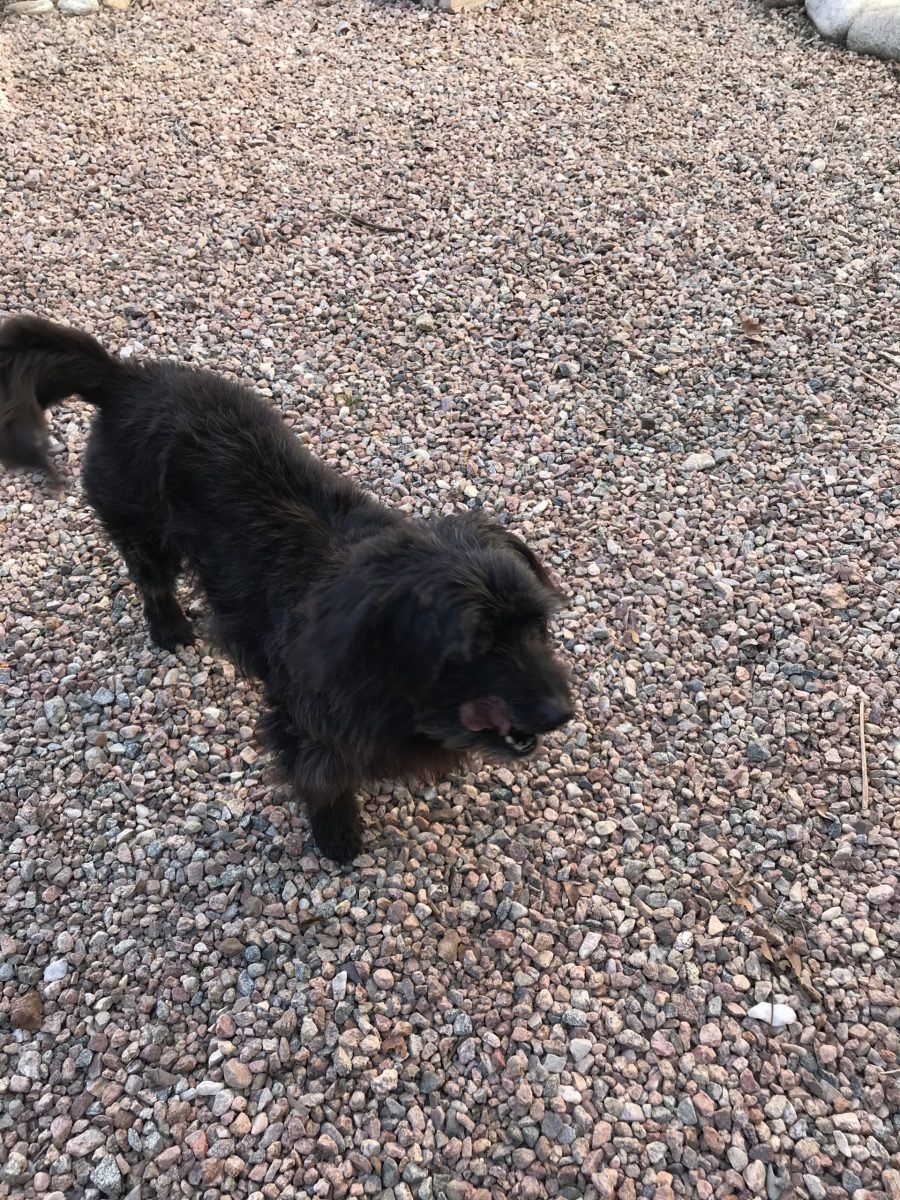 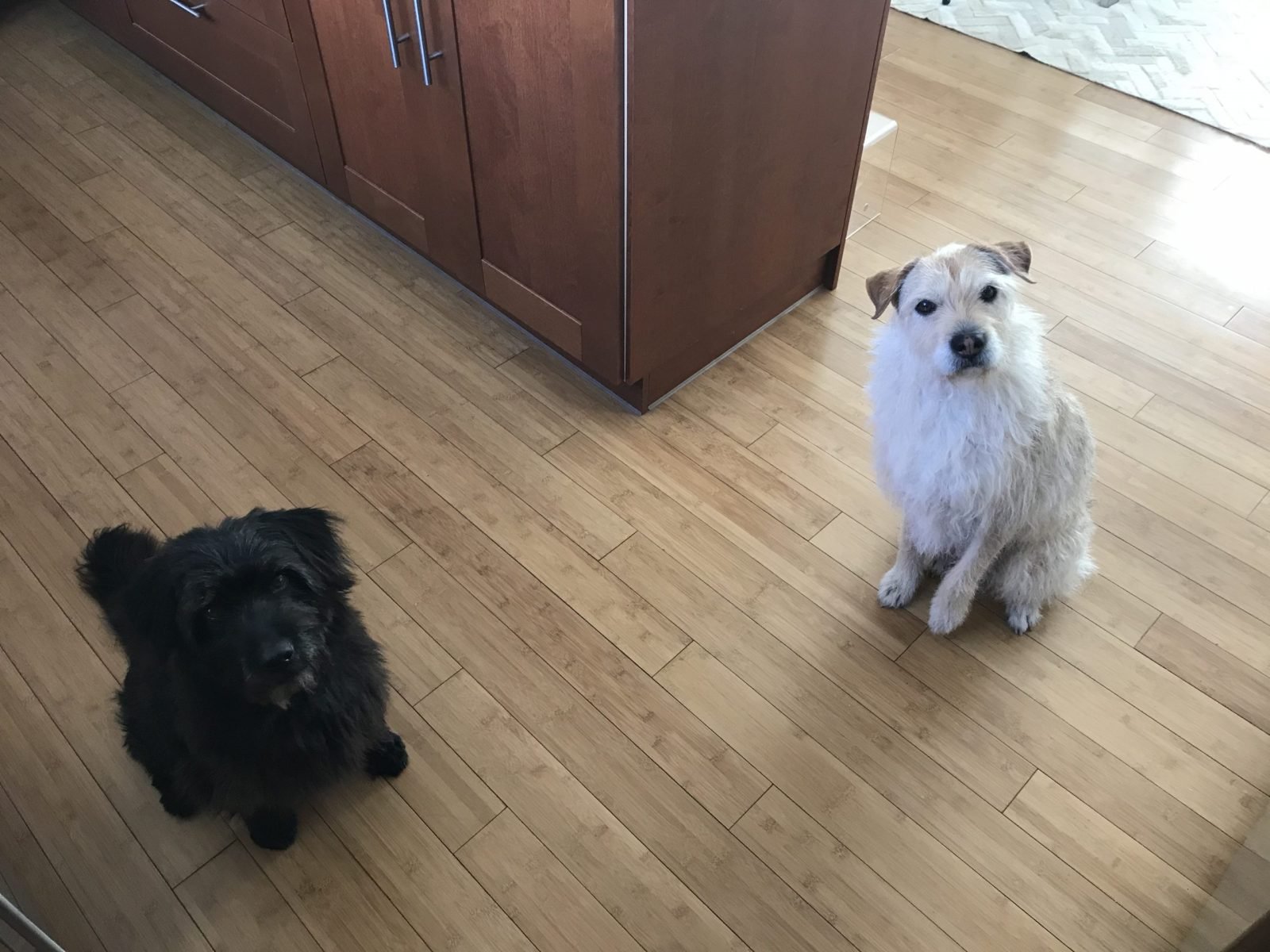 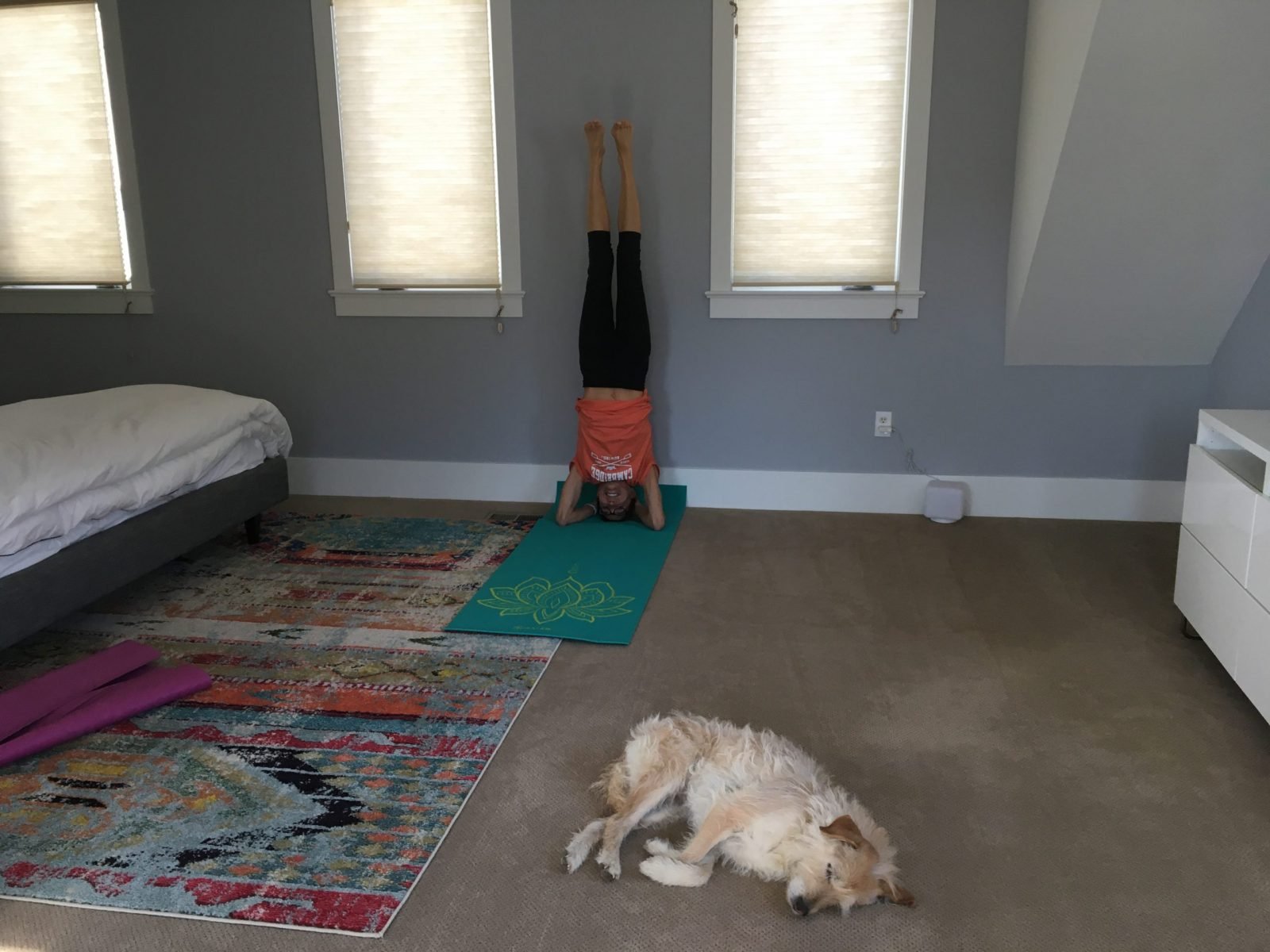 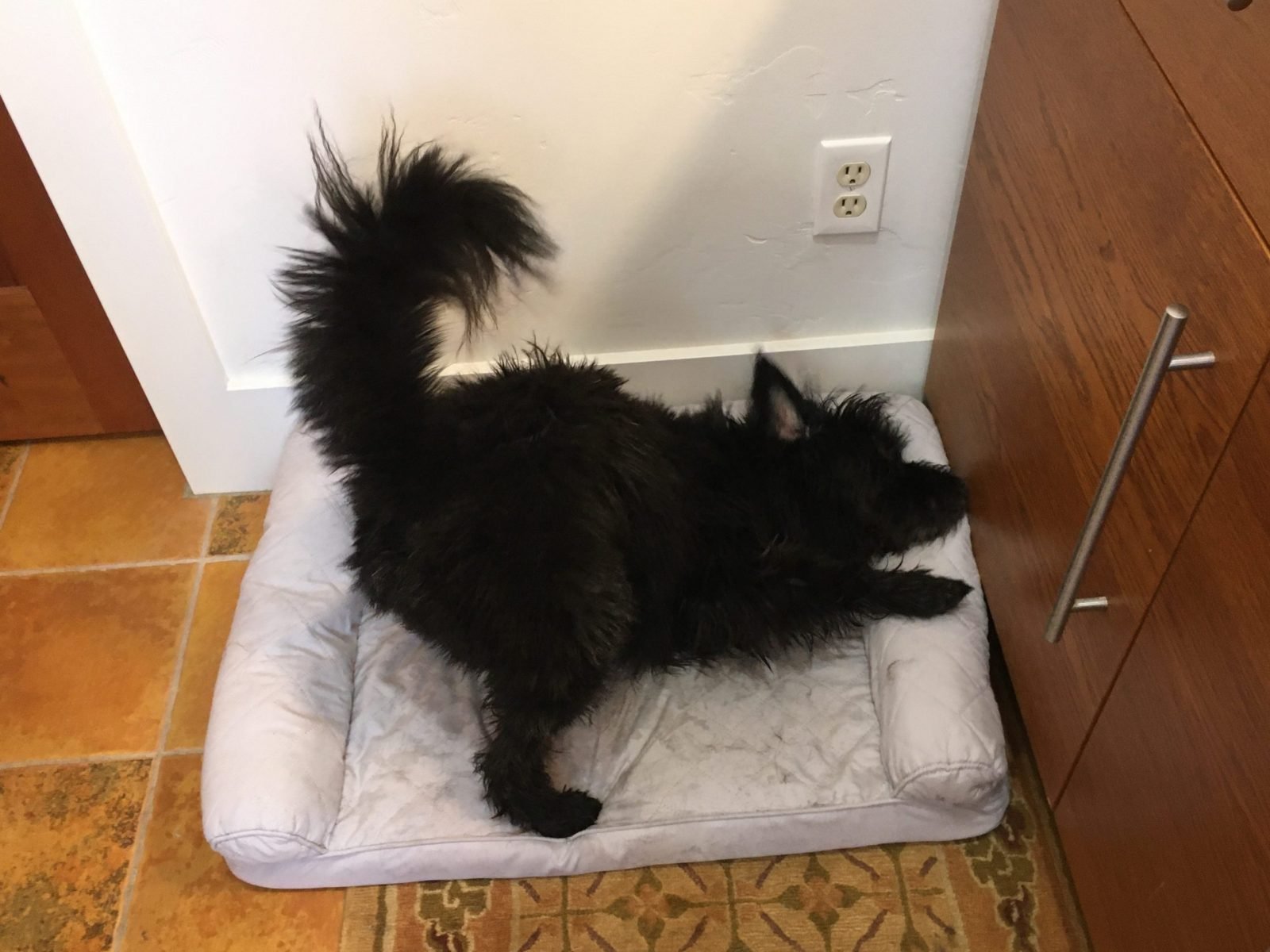 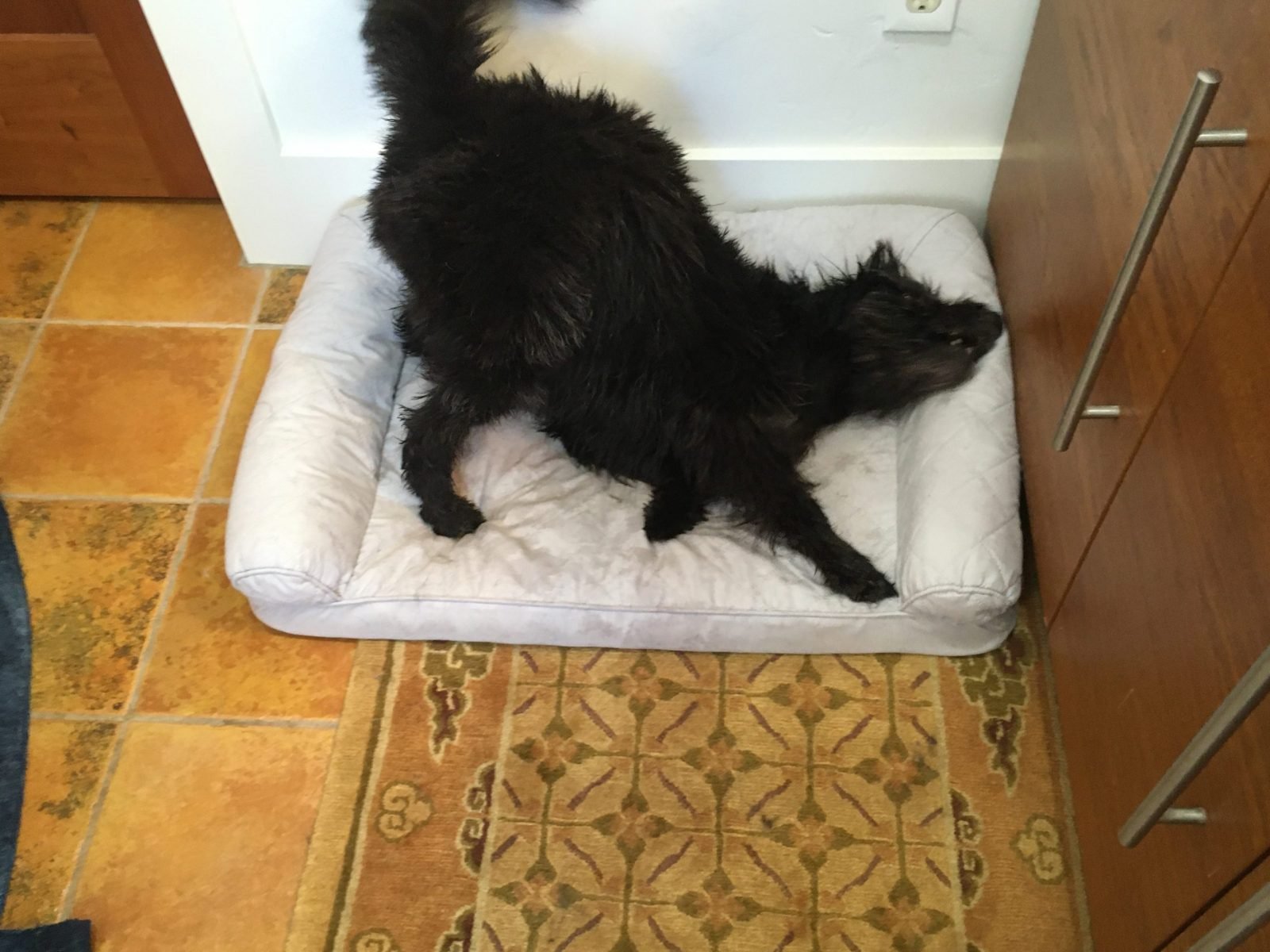 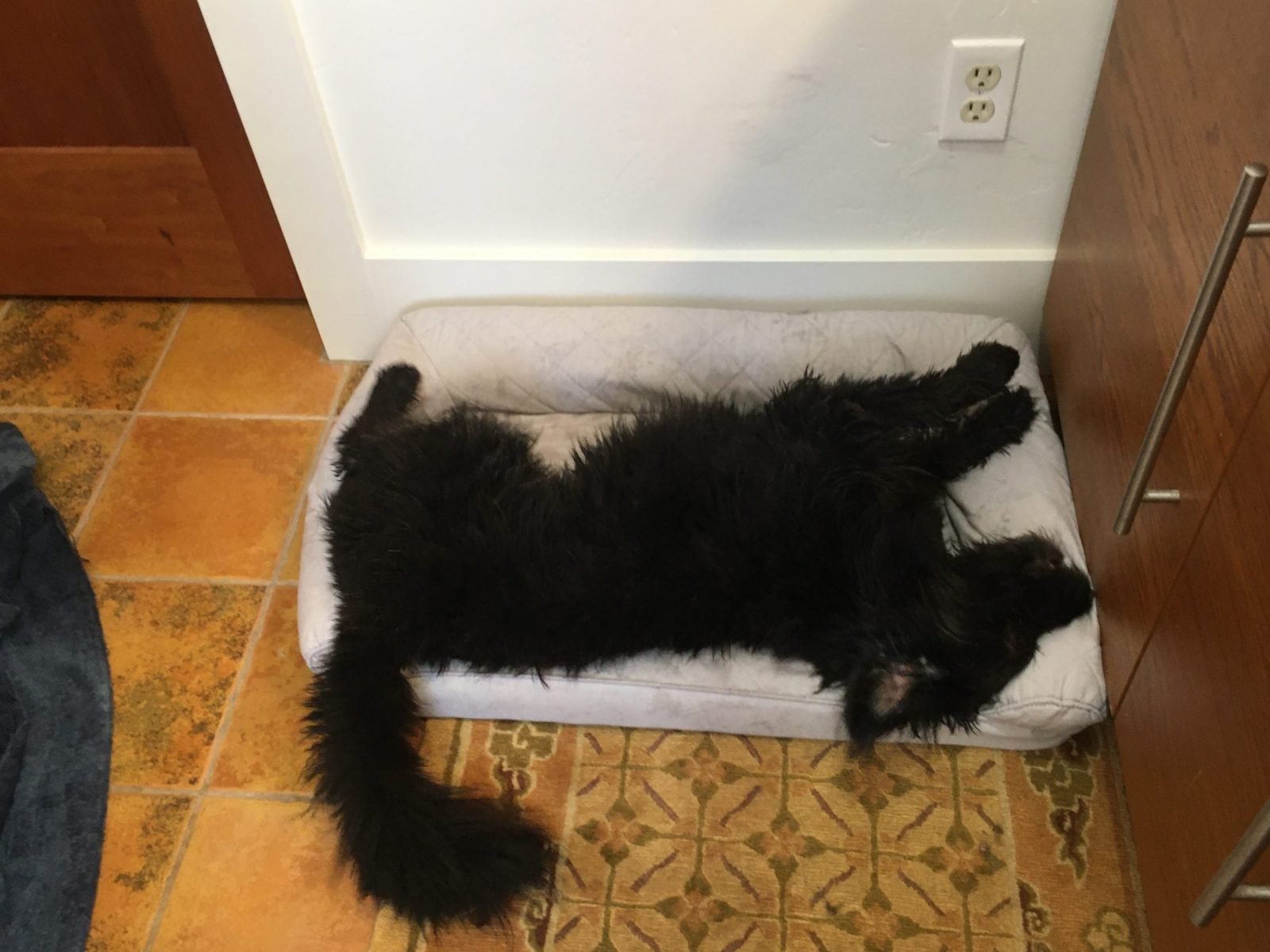 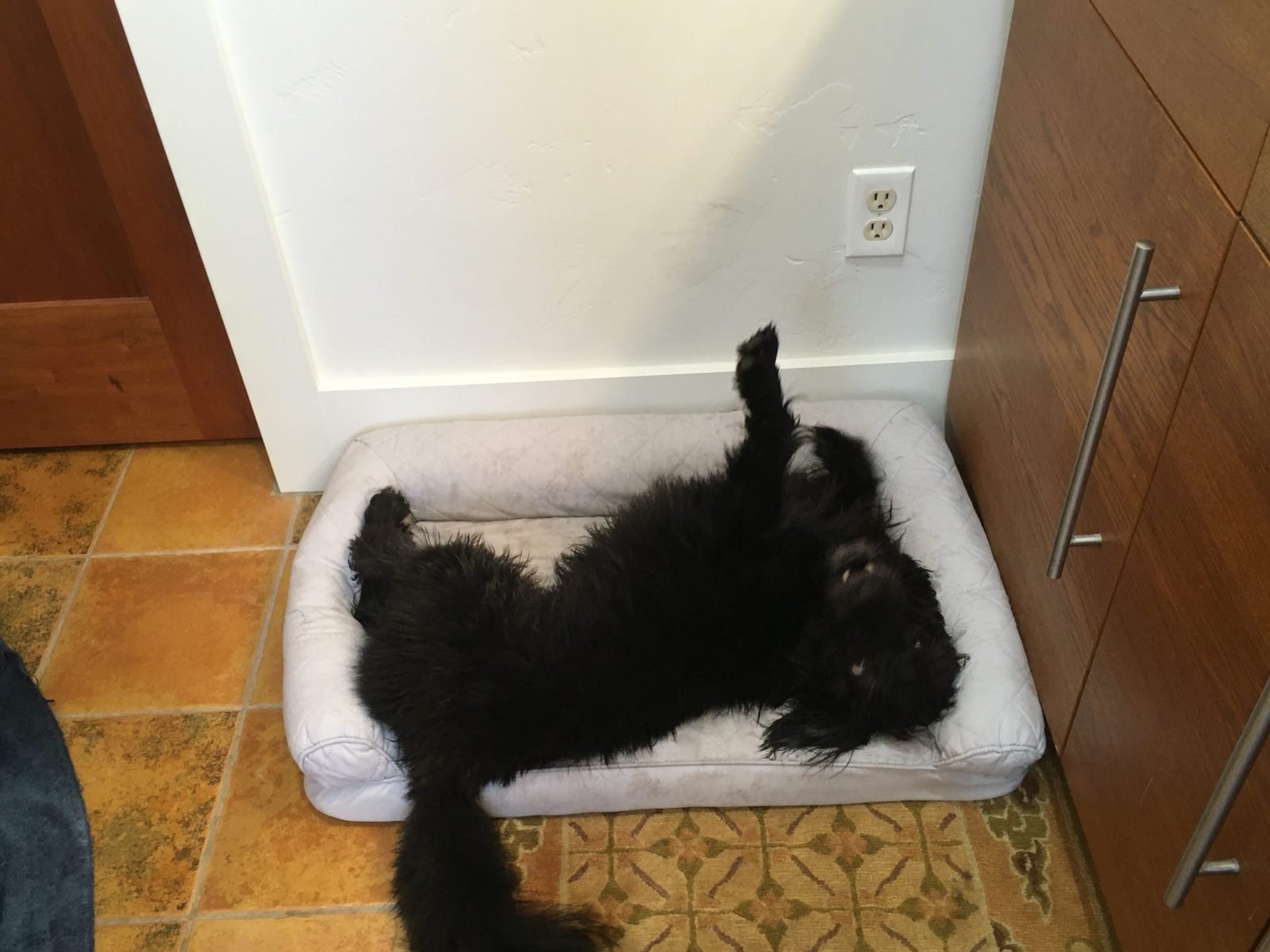 It’s been a while since I posted so this will cover all the fall and spring’s adventures. We are heading to BV again in a couple weeks and it will be extra nice to get into the wide open spaces and fresh air.

In November, we did our yearly trip to Mexico – we stayed in Cancun and had a wonderful time. The resort we stay at is so nice, that there is no reason to leave except for a daily run on the beach.

We went back to BV for a couple of weeks at the end of November and it was bitterly cold – a huge contrast to last year. We stayed in town and frequented all our favorite places.

I’ve been doing a lot of cooking and have stocked up on chili, corn chowder, salmon, and curry vegetables. The sushi boat is from a lunch I had with members of my old team. 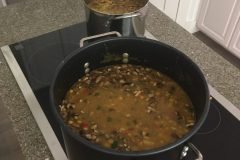 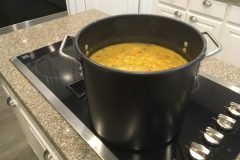 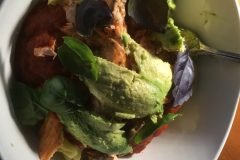 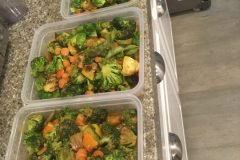 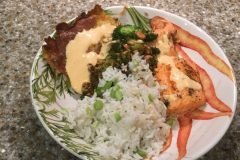 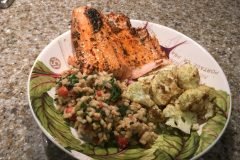 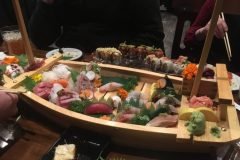 We also did some work around the house. A new chandelier for the dining room and a fresh coat of stain on the fence.

We had our doors adjusted in the house and the guy that fixes the doors also creates these intricate rock structures in the greenbelt. He told me about one he created off trail in the middle of one of the canyons. I was determined to find it when I ran that weekend, and I did. It’s hard to get a good perspective from the picture, but it’s taller than I am.

There have also been a few races – Cactus Rose, Bandera, Spider Mountain (headlamp pic below), and the Maze (last pic). In 2 weeks, I’m running the Tangle. 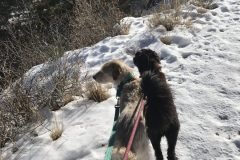 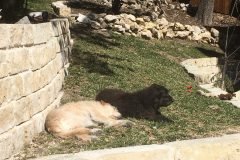 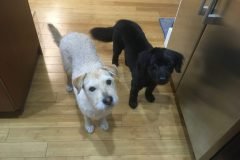 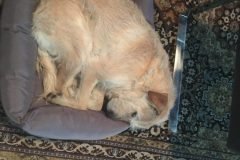 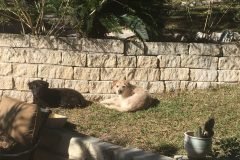 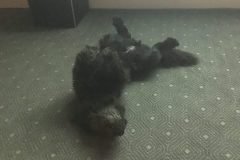 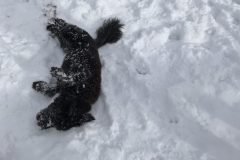 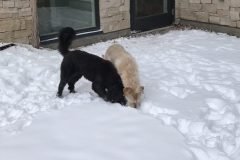 The end of summer is here. I’m packing up the house and getting it ready for winter. The weather has been awesome this week so the dogs and I have been enjoying the fall colors from the trails. I’m meeting my friend Jason on Thursday for a final climb of Yale. The next morning, the dogs and I are off to Austin.

I made a dinner so pretty last night, I had to take a picture of it. Baked potato smothered in chili with sour cream, tomatoes, and avocado on top.

Winter came this week but it was much less than was forecasted. Snow didn’t stick in town, but the mountains were covered.

I was prepared with inside activities since I’d already cut all the plants down, taken in all the patio furniture, and removed the outside screens. My chore was to make a giant amount of campfire salmon to freeze. I hit a new mark with 16 foil wrappers. Even in the new oven, it took 3 loads to cook it all.

The next day, I was craving chili. I already took the giant pot back to Austin so I used the Yeti to mix all the ingredients. I used every pot I had and the crock pot to cook it and ended up with 8 gallons of chili to freeze.

Makes me want to watch Game of Thrones again. The days are getting shorter and lazier. Darby has taken full advantage of slowing of pace.

The weather is supposed to take a turn towards winter on Thursday – snow and a low of 9 degrees… I bought a lot of food to cook and a bottle to drink during the cold days. Last week, I hit the mountains pretty hard to get ready for Cactus Rose at the end of the month, so I took it easy today with a hike up to the East ridge on Mt Yale. I took a couple pictures of the trees changing color in the canyon

The dogs and I plan on heading back at the end of next week. All of us will be back for the Christmas open during Thanksgiving. I attached the video I made of Preston and my trip to Kilimanjaro that I forgot to post earlier.

The last 6 weeks have been busy and fun. Tracy has been here a lot to enjoy all the great things BV does in the fall. I also made a trip to Austin to pick up Preston and take him to CalPoly. I returned to Austin for a week and Tracy drove back up to BV with me. The picture below is the start of the TransRockies run.

We’ve spent a lot of time at the local distillery, Deerhammer. The dogs enjoy it since the food truck next to it serves sweet potato fried (their 2nd favorite food behind salmon)

I’ve been slowly replacing the appliances in the house. The latest addition is a new stove. The house is huge, but the space for the appliances are tiny. This was the largest stove I could find for the space. The 2nd picture is how close I cut it to make sure you could pull out the drawer.

The dogs get walk every morning and the view never gets old. This was the beginning of September and later, there will be some late September pictures. The weather patterns in the fall bring more clouds early so the sun rising makes some incredible colors.

September weather was awesome. We spent a lot of time on the deck and Izzy enjoys sunning.

The dogs and I went back to Austin since I was going to drive Preston to college. While in Austin I was able to get a run in, do some maintenance around the house, and have a poker game. Preston and I left on a Tuesday and we took 4 days to get to SLO (CalPoly). We spent the first night in Roswell since I was excited to visit the UFO museum. The second night was in Flagstaff and we were able to have dinner with Kathy and John Eastwood (my undergrad adviser). The third night we went to one of the few casinos in California that allows 18 year old’s to play poker. Preston went straight to the tables and I didn’t see him until 5am the next morning. He had his ups and downs but came back 50% up. The last night, we stayed at one of the few hotels with vacancy in SLO. I dropped him off to his dorm first thing the next morning and left right after unpacking the truck. His dorm is pictured below – nothing special with 3 people in a room.

Tracy, the dogs, and I drove back to BV the following Sunday. It was an uneventful trip except the Eagles lost to the Lions (yeh for me). We had a wonderful time together in BV. Many trips to Deerhammer, Asian Bistro, and the Surf Hotel. We also volunteered at the 14ners festival, selling drink tickets. The pictures below are from a hike we did up Mt. Yale from the standard route at Denny Creek. Tracy did awesome and the day was wonderful.

Last week, the colors were awesome awesome during our morning dog walk.

CW has been in BV on and off for a month. The adventure I plotted for him this year was for him to climb 7 of the 14ners in the Sawatch Range. He would camp at the base of one, climb the following day, and then trek to the base of the next one. I met him for 4 of the climbs. He did great.

He camped in Missouri Gulch and we climbs Belford and Oxford back to back and then I ran down the backside and climbed Missouri also.,

When I was meeting him in Great Horn Basin, I ran into a pair of moose. If you zoom in you can see both of them in the meadow below.

His final peak was Mt. Yale. We went up the East Ridge which involves a lot of route finding and scrambling. He was exhausted when we finally reached the summit.